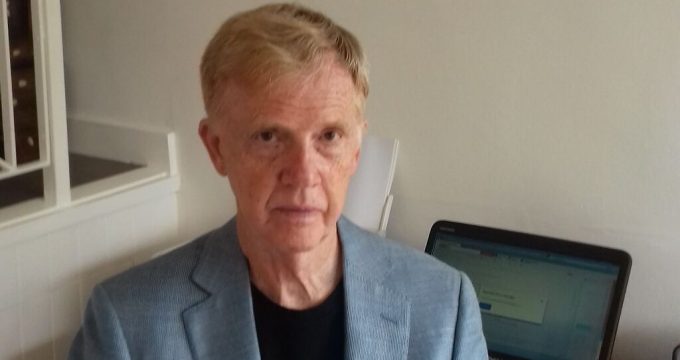 IRNA – The former ambassador of the United Kingdom to Syria said that the idea that the Iranian civilian aircraft could be of any kind of threat is “ludicrous”.

In an exclusive interview with the Islamic Republic News Agency (IRNA), Peter William Ford said that it can only be assumed that the US is attempting to mount a provocation against Iran to improve the rapidly diminishing chances of Trump being reelected.

Iran’s Mahan Air passenger plane was en route to Beirut, Lebanon, on Thursday, when it was approached and threatened by two US F-15 military jets over Syria.

Although the Iranian plane finally landed in Beirut Airport unharmed, some of its passengers were immediately taken to hospital.

Bill Urban, the spokesman for US Central Command (CENTCOM) announced that the operation was done “to ensure the safety of coalition personnel at At-Tanf garrison”.

Urban added, “Once the F-15 pilot identified the aircraft as a Mahan Air passenger plane, the F-15 safely opened distance from the aircraft. The professional intercept was conducted in accordance with international standards.”

But the UK politician has another idea. Ford said, “In no way can the illegal US base at Al Tanf be considered any form of justification. The idea that the Iranian civilian aircraft could form some kind of threat is ludicrous.”

He added, “The harassment of a civilian airliner over the territory of a third country is illegal in half a dozen different ways. US aircraft have no right whatsoever to be conducting operations over southern Syria.”

Answering a question about the consequences of the measure, he said, “Washington is playing a dangerous game.”

The experience of assassinating Lieutenant-General Qasem Soleimani and Iran’s reaction “should have taught the US that Iran cannot be provoked with impunity”.

“However, I am sure that Iran will not allow itself to be drawn into a trap. It will consider its options carefully and react to the timing of its own choosing.”

UK political analyst, Rodney Shakespeare, told IRNA that US President Donald Trump thinks that war with Iran can increase the likelihood of his reelection, but in fact threatening an airliner is a very serious issue.

Steve Bell, a senior member of the Anti-War Movement, believes that Trump’s administration needs to explain to the international community that how it ensures that such things will not happen.

Iran’s Permanent Ambassador to the United Nations Majid Takht Ravanchi has talked with the UN Secretary-General Antonio Guterres, stressing that in case any incident that may occur to the Iranian plane on its way back home, the United States of America would be held responsible. He is also going to write a letter to Guterres and the UN Security Council to protest against the US illegal action.

Iran Civil Aviation Organization said in the wake of US jet fighters’ aggression against Mahan Air flight 1152 that happened in international corridors in the Syrian sky, some of the passengers were injured due to the pilot’s reaction to prevent accidents.

Iranian Foreign Minister Mohammad-Javad Zarif in a message slammed the US audacity to compound lawlessness with lawlessness, saying these outlaws must be stopped before a disaster.

“The US illegally occupies the territory of another State and then harasses a scheduled civil airliner – endangering innocent civilian passengers – ostensibly to protect its occupation forces,” Zarif wrote on his Twitter account on Friday.

“Audacity to compound lawlessness upon lawlessness. These outlaws must be stopped before a disaster happens,” he added.

Iranian Foreign Ministry spokesman Abbas Mousavi said Iran will leave no hostile act unanswered and will reciprocate any US unlawful actions with a decisive and proportionate response, deriding the CENTCOM spokesman’s claims that US military jets conducted a routine air mission in the vicinity of the CJTF-OIR at Tanf garrison in Syria.

Referring to accepting the responsibility of endangering Mahan Air flight by Bill Urban, spokesman for US Central Command, Mousavi slammed this adventurous and dangerous act and termed it as violating international aviation law and jeopardizing regional peace and security.

Iranian Parliament Speaker Mohammad Baqer Qalibaf said on Friday that the Americans are lying that they flew in the standard routine, while the pilot received two TCAS warnings due to the too much approach of two fighters at the top and bottom of the aircraft.

Any US crime will undoubtedly accelerate the humiliating destruction of the arrogant powers in the region, especially the notorious Zionist regime, he added.