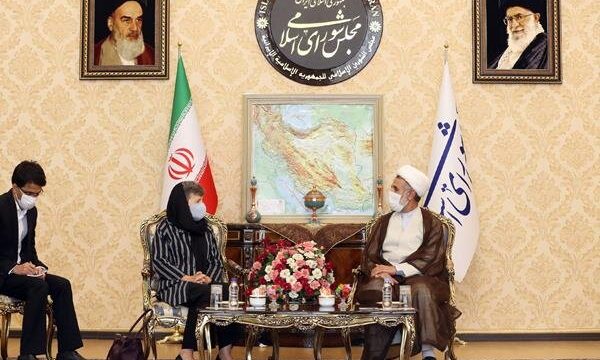 MNA – Chairman of Iranian Parliament’s National Security and Foreign Policy Committee said that the security of West Asia will be ensured with the roleplaying, interaction, and participation of the regional countries.

In his meeting with Australia’s ambassador to Iran Lyndall Sachs in Tehran on Sunday, Mojtaba Zonnour voiced Iran’s tendency for the development of all-out ties with Canberra, underlining the significance of the two sides’ Parliament in improving relations.

He expressed discontent with Australi’s act of joining the US-led coalition in the Persian Gulf saying that “regional security can not be neither imported nor purchased.”

The Iranian MP added that the US presence in the region has not helped combat the ISIS or pirates of the Oman Sea and the Indian Ocean.

Reacting to the remarks of the Australian PM about Iran’s reduction of JCPOA commitments, he said the Australian PM had better persuade the US President Trump and European officials to stay committed to the JCPOA obligations and stop unfair sanctions against the Iranian nation.

“The strategic position of the Islamic Republic of Iran, as well as regional stability and security, has paved the way for investment and the development of trade, commerce and tourism interactions with Australia,” Zonnour said.

Sachs, for her part, welcomed the expansion of Parliamentarian ties with Iran as an initial step to boosting cooperation in other sectors.