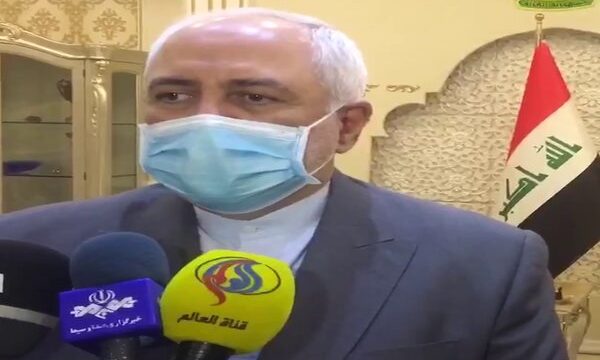 MNA – Iranian Foreign Minister Mohammad Javad Zarif said that he is to discuss with Iraqi officials regional issues, the US crimes in the region, the martyrdom of Lt. Gen. Soleimani and his companions.

Upon arrival in Baghdad on Sunday morning, Zarif told reporters, “I am very happy that after the formation of the Iraqi government, I had the opportunity to visit Baghdad.”

“Iraqi Prime Minister will visit Tehran on Tuesday at the invitation of the Iranian President of Iran,” he added.

“Therefore, my visit, which was already coordinated, is a great opportunity to provide necessary coordination for the trip of Iraqi Prime Minister,” Zarif said.

He went on to say, “Today in Baghdad, I will have the opportunity to meet and exchange views with various Iraqi officials, including the President, the Prime Minister, the Speaker of Parliament, the Foreign Minister, the Chief of the Judiciary, the head of Hashd al-Shaabi organization, and other political officials.”

“We will discuss regional issues, the US crimes in the region, the martyrdom of Lt. Gen. Soleimani and his companions, as well as the expansion of regional cooperation,” he noted.

“I will travel to the Iraqi Kurdistan region in the afternoon at the invitation of Nechirvan Barzani to hold talks with him and other regional officials,” Zarif said.

Foreign Minister Zarif have also paid tribute to Lt. General Soleimani and Abu Mahdi al-Muhandis at the place near Baghdad Airport where they had assassinated by US terrorist forces in January.

According to latest report, Zarif has started the first round of talks with his Iraqi counterpart Fuad Hussein in private. He will then attend a joint conference with him.