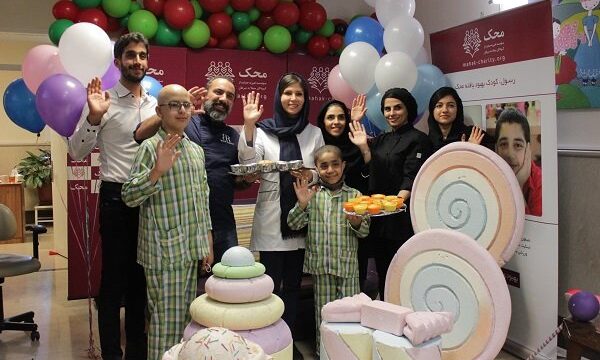 MNA – MAHAK, Pediatric Cancer Research and Hospital Center established by Mahak charity, has launched a new digital channel for sympathizing with your loved ones while providing meaningful support for cancer-stricken children.

With over 29 years of experience in supporting children with cancer and their families, MAHAK has learned that no one should be left alone with their sorrows during hard days. Until recent Coronavirus-related restrictions, we offered condolence banner stands for funeral processions. Now that ‘our hands are apart’ and in line with our social responsibility, MAHAK has provided a novel solution ‘to get the hearts closer’.  The new donation channel has been unveiled in a live meeting on MAHAK’s Instagram site with the presence of Arasb Ahmadian, CEO of MAHAK, Mohammad Ebrahim Ohadi, Psychiatrist and a member of MAHAK Board of Trustees and Directors, Behnaz Asangari, Manager of MAHAK Support Services Department, and Maryam Mohammad Ali Head of Psychology Division. During this meeting, they elaborated on the importance of mourning, the problems caused by incomplete mourning, and introduced “MAHAK Sympathy Message”.

Arasb Ahmadian, the CEO of MAHAK argued that during hard times, people who suffer the loss of a loved one need to be sympathized with and since the spread of Covid-19, the possibility of holding condolence gatherings and commemoration events have been canceled resulting in increased difficulty to deal with the loss for loved ones. In this vein, MAHAK as a charity with the experience of sending condolence banner stands to funeral events as a way of fundraising has come up with a new method for condoling. Since societies have increasingly moved towards digital communications, our new package is also based on Information Technology as a means. Therefore MAHAK’s sympathy message can be delivered as a result of devising the given solution with this technology.

Dr. Mohammad Ebrahim Ohadi, psychologist and member of the Board of Trustees and Directors emphasized that using this new platform by the donors of the ever-expanding family of MAHAK will be a precious step taken in support of cancer-stricken children.

Nobody should feel lonely in hard times

Behnaz Asangari, Manager of MAHAK’s Support Services Department defined the concept of mourning as a natural response to loss often in the form of heightened emotional suffering for the mourners. Moreover, she emphasized the significance of concurrent psychological interventions in order to prevent lingering issues in the future.

Manager of MAHAK’s Support Services Department elaborated on how the main challenges of the recent crisis including health protocols, procuring hospitals’ requirements, and solving the problems of the families in need who have been affected by COVID-19 might result in less attention to the bereavement experience. She added: “What might be disregarded is the necessity of psychological interventions at the beginning of the incident and psychological reconstruction of trauma in a period of time. Interventions during the trauma for a short to medium term can prevent future problems and help the mourner return to normal life.”

Mourning is not occurring as it should these days

Maryam Mohammad Ali elaborated on the concept of incomplete mourning and said that today over 9000 people have passed away in Iran because of the Coronavirus which means more than 9000 families are suffering from incomplete mourning.

She emphasized that MAHAK as a result of its over 29 years of experience in facing happiness and sorrow in addition to success and failure in battling cancer has launched this novel approach in order to offer an alternative mourning platform designed to soften bereavement pains during the current situation.

We hope that the use of “MAHAK’s Sympathy Message” will improve the psychological conditions of the bereaved who have not been able to hold funeral ceremonies for their lost loved ones due to social distancing. Additionally, this functions as a new channel for providing support for children with cancer and their families all over Iran.

The related information on how to use this platform from outside Iran will be announced as soon as possible.