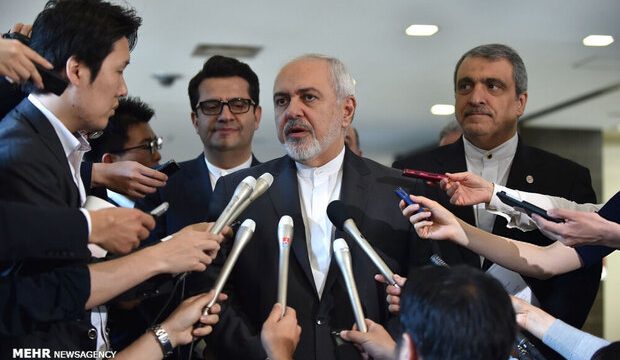 MNA – Iranian FM Zarif said on Tuesday that the UN rapporteur report which described the assassination of Lieutenant General Soleimani as ‘unlawful’ move by the US, has provoked America’s wrath.

Zarif informed that immediately after the assassination of Lt. Gen. Soleimani on January 3, the Iranian foreign ministry started taking legal and political measures to prove the world that the US assassination of the IRGC commander has been an illegal and terrorist act.

Iran followed up the case at UN offices in Geneva and New York, he added while speaking to reporters on the sideline of his visit to the Parliament on Tuesday.

The country’s efforts have ended in the recent report of the UN, which is proof for Iran’s right and has provoked the US wrath, Zarif expressed content.

On July 11, the UN Special Rapporteur said that the US has distorted the principle of sovereignty as it has failed to provide sufficient evidence of an attack against its interests to justify the assassination of Gen. Soleimani.

It is not possible to target a high-ranking official in another country in this way, UN human rights investigator Agnes Callamard said in an interview with Al Mayadeen.

The United States has failed to provide sufficient evidence of an ongoing or imminent attack against its interests to justify the assassination of Gen. Soleimani, she added, saying that thereby, the US has distorted the principle of sovereignty.

The US action violated the rules of different principles, she stressed.

In the 44th regular session of the Human Rights Council which was held on Thursday, UN Special Rapporteur Agnes Callamard called the assassination of Lt. Gen. Soleimani by US forces a violation of international law.

“The assassination of Lt. Gen. Soleimani is an illegal act and a great crime that has endangered world peace and security,” Esmaeil Baghaei Hamaneh said.