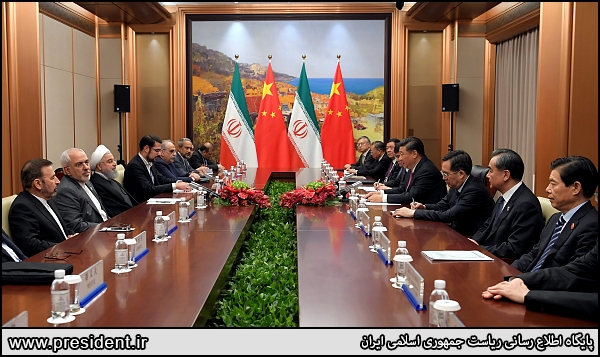 Iranian Diplomacy – The Iranian cyberspace has been teeming with anger the past few days, after news circulating around on a ‘secretive’ 25-year strategic agreement between Tehran and Beijing. Amid the Coronavirus pandemic which has tarnished the already unfavorable perception of China in the Iranian society, rumors that the accord includes underselling oil to China, handing Persian Gulf islands of Kish and Qeshm to the Chinese, and deployment of Chinese security and military forces in Iran, has raised strong voices of protest. Although these voices do not find their way onto the pages of officially controlled media outlets, they have been quite loud in the social media.

Hashtags of “Chinese Turkmenchay” have popped up on twitter, alluding to the humiliating 1828 treaty between Iran and Imperial Russia in 1828 which saw Iran cede the entirety of its Caucasian territories to Russians. High profile reactions to the agreement came from as diverse figures as US Secretary of State Mike Pompeo, Reza Pahlavi, son of Mohammad Reza Pahlavi the last Shah of Iran, and Mahmoud Ahmadinejad, former president of Iran. “It is not valid to enter into a secret agreement with foreign parties without considering the will of the Iranian nation and against the interests of the country and the nation, and the Iranian nation will not recognize it” the populist former executive head said two weeks ago.

Following the rising protests, a draft of the agreement was published online in non-official channels, and officials were forced to respond to rumors.

Mahmoud Vaezi, President Hassan Rouhani’s Chief of Staff, appeared on Channel 1 of state-run TV three days ago, explaining the outline of the agreement.

Pointing to Iran-China expanding relations throughout the last decade, Vaezi stressed that the agreement was initially proposed during Chinese leader Xi Jinping’s visit to Iran in 2016. Hassan Rouhani and Foreign Minister Javad Zarif also discussed the agreement during their visits to China Vaezi reminded, to reject claims that the agreement was proceeding clandestinely.

Vaezi however did not elaborate on the details of the agreement, saying that it has not been finalized yet.

“The agreement, and expansion of ties with an ally is an advantage for Iran and a leverage against our enemies. That is why we see the White House speaking of Turkmenchay for the first time,”, suggesting that Pompeo was shedding crocodile tears.

Pointing to rumors that Iran will rent Kish and Qeshm islands to Chinese for 25 years, Vaezi called it part of propaganda war by ‘enemies’. “[They] know issues the establishment is sensitive about, and fuel such rumors to disrupt Iran-China relations” he said.

Chief of Staff also rejected rumors on underselling oil to Chinese. “Oil pricing is set by international rules and based on specific mechanisms. The 25-year agreement has not entered into such details,” he added.

Vaezi reminded that expansion of ties with China disrupts the political order favored by the Americans, hence their opposition. “Our dear people should discern the enemies’ plots and know that the propaganda center for this plot is based outside Iran”.

Writing in the reformist Etemad Daily, Reformist analyst Abbas Abdi voiced support for strategic agreements in general, but expressed his suspicion towards the agreement with Beijing. Criticizing the post-1979 Revolution mentality of Iran’s exceptionalism and absence from strategic agreements, Abdi said “there is no problem in initiating these [strategic agreements] with China … only if it does stop at China and happens with the West, Russia, India, our southern neighbors and other regional and economic powers.” Otherwise, it would make Iran codependent on China.

Abdi expressed concern with the agreement however, arguing that the personalized, populist, and divided nature of Iranian politics, and the lack of consensus in foreign policy, render such agreements with other countries unreliable, depriving Iran of any likely advantages and only creating liabilities.

Abdi warned that the agreement is driven on Iran’s side by financial needs to compensate for budget shortage. “With the inefficiency and corruption in resource allocation, any investment in Iran will be squandered and create debts for the country,” he argued. “Without political reforms, no diplomatic initiative will benefit [the country]”.

Foreign policy expert Ali Bigdeli voiced similar concerns. Bigdeli called the conditions unfavorable for such an agreement: “there is no balance [between Iran and China] in signing this agreement. Definitely the Chinese will have the upper hand,” he said. “Even if China intends to invest 480 billion dollars in Iran, it will be a problematic investment and we will fall under China’s economic and political influence”. Pointing to rumors that Chinese officers will overlook operationalization of the agreement, Bigdeli warned about the dire consequences of this action. On the same page with Abbas Abdi, said “as long as Iran does not reappraise its strategies and policies, any kind of long-term, strategic agreement with countries such as China will bring us disadvantage”.

In his interview with the government mouthpiece Iran Daily, Gholamreza Mesbahi Moghaddam, former MP and now a key member of the Expediency Discernment Council, analyzed the agreement from the conservative viewpoint: “the [Rouhani] administration is clearly attached to the West. The 25-year cooperation agreement with China was unrolled only after the Leader of the Revolution [Supreme Leader Ayatollah Khamenei] dispatched a certain person with a certain message [to China] to negotiate [the agreement] with the President of China. The government took no decision [on the agreement] before that, neither with China nor with Russia.”

This ‘certain person’ appeared to be Ali Larijani, a trusted figured in the Islamic Republic establishment, former speaker of the parliament who also led Iran’s nuclear negotiations with the West in mid-2000s.

When during his speech in the parliament on July 8th, MP Sabbaghian questioned the procedure of the agreement with China and asked for the parliament’s monitoring of the negotiations to prevent another “bitter JCPOA experience”, he was reminded by Deputy Speaker of Majles Amirhossein Ghazizadeh that speaker of the Tenth Parliament Ali Larijani “was in charge of the case on behalf of the establishment.”

Conservatives are generally supportive of the agreement, viewing it as a counterbalance against the United States’ pressures on Iran. Alaeddin Boroujerdi, former head of the parliament’s National Security and Foreign Policy Committee, and head of the Iran-China Parliamentary Friendship Group in the previous parliament, praised the contract with China in an interview with Tasnim: “The West is horrified of a nexus between China’s massive global capacity and Iran’s developing capacity. That is why the line on sabotaging Iran-China relations … has become more intense with the news of negotiations disclosed”.

“Even inside the country, those with responsibilities have ignored trade and diplomatic ties with China because of their West-oriented mentality.” Boroujerdi said, throwing a shade at the government.

“People should know: Airbus is manufactured in Shanghai; Benz, BMW, and American Apples are also manufactured in this country”, Boroujerdi said, touching on Iranians’ general perception of Chinese products as low-quality.

“Look towards East has been a constant in the Islamic Republic since the victory of the Islamic Revolution” said Gholamreza Ansari, Foreign Minister Javad Zarif’s economic deputy, a remark that runs against the “No East, No West” tenet that has, at least nominally, governed Iran’s foreign policy after the 1979 Islamic Revolution. Ansari lavished praise on China in his interview with the state-run TV, and called some remarks on Iran-China strategic cooperation document “preposterous”.

“The Speaker of the US Department of State, [the country] which has imposed the harshest sanctions on Iran even despite the Coronavirus pandemic, has compared the document with Turkmenchay Treaty and is faking compassion with the Iranian people” Ansari said.

“China is now the only official buyer of our oil” Deputy FM reminded. “US, UK, and Anglo-Saxons’ policy is to put pressure on Iran to forestall relations between China and Russia.”

“In all international and political areas, we and the Chinese are on the same note.”