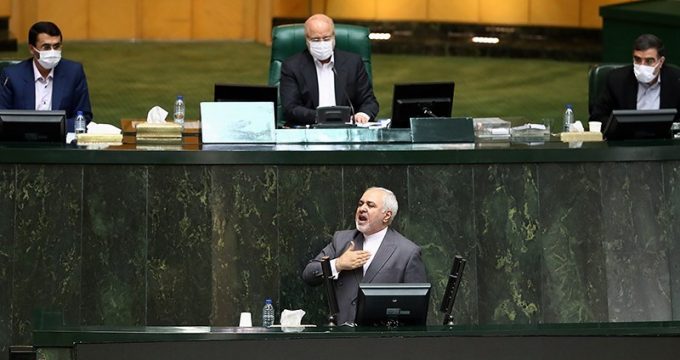 Zarif says US has targeted Iran interests in region

IRNA – Iranian Foreign Minister Mohammad Javad Zarif said on Sunday that the US has targeted Iran’s interests in the region and taken measure to put pressure on Iran’s regional friends.

United States has targeted Iran’s interests in the region, Zarif said in his address to Majlis (Parliament) formal session this morning.

The US anti-Iran measures aim to divide people from the government and undermine the Islamic system, the foreign minister added.

All those measures are concealed behind the “Maximum Pressure” policy the US follows, said Zarif stressing that they have been written on John Bolton’s book.

Zarif further stressed the need to be united and preserve national solidarity.

He called on the national bodies to contribute to the goal of bolstering peace and stability in the region.

Meanwhile, he stressed the importance of fostering better relations with neighbors.

Today, Iran enjoys the best level of relations with Turkey, Russia, Afghanistan, Azerbaijan, Iraq, Pakistan and some neighbors in southern part of the country, the foreign minister stated.

He referred to his visits to Russia and Turkey almost 20 times, and several other visits to Pakistan, Iraq and Afghanistan as indication of Iran’s focus on its neighboring cooperation.

About the US policies in the transition period, Zarif said the United States tries to prevent understanding and recognition of new powers taking shape in the global community.

Elsewhere, he talked about the Astana talks on Syria peace process and Iran’s positive role in the process of peace talks.

Iran, Russia and Turkey are the three guarantors of peace in Syria suffering from unrest and terrorist acts since March 2011.

At his remarks, Zarif spoke about ties with Beijing, stressing that there is no secret issue about Iran’s agreement with China.

Whenever the two countries reach any agreement, it will be made public, he added, highlighting transparency about process of drafting the agreement.

Iran’s re-joining Silk Road project is among the important issues of the 25-year agreement between Iran and China, he noted.

Zarif also underlined the need to keep economic pulse strong as the US through economic terrorism has been trying to exert pressure on Iran.

Further, he referred to Iran’s accession to Eurasian Economic Union (EAEU) as an indication of the priority given to the issue of economy and also economic relations with neighbors.

About the Iranian foreign policy, the foreign minister said the Islamic Republic should stand against the US measures and endeavor to integrate Iran’s power in region and the entire world as well.

At the end of his remarks, the foreign minister talked of the July 2015 nuclear deal, aka Joint Comprehensive Plan f Action (JCPOA), and described the landmark international agreement as the one Iran can be proud of.

History will prove that the JCPOA is something Iran must be proud of.