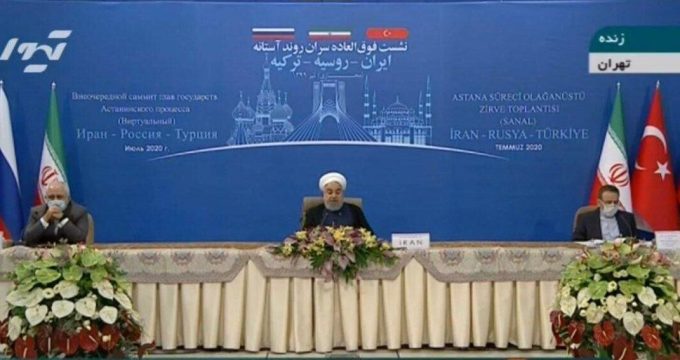 IRNA – Iranian President Hassan Rouhani termed Astana talks as the only successful process for solving the Syrian crisis peacefully and said that his trend has had many achievements so far.

Speaking in a joint video conference with his Russian and Turkish counterparts, Rouhani said that the three neighboring countries as peace guarantors are responsible for preserving it.

The Iranian president said that many developments have so far happened in Syria, adding, “So we have decided to hold a vitual meeting.”

Iran slams any sanctions on nations particularly Syria, he said, adding that the Islamic Republic of Iran will continue to support the Syrian people and their legitimate government.

The US regime’s illegitimate and inhumane actions will not undermine the friendly bonds of its allies, he further noted.

The US should realize that what it has not achieved through military pressure and resorting to terrorist groups cannot be reached via economic pressure by the punishment of the Syrian people, he stated.