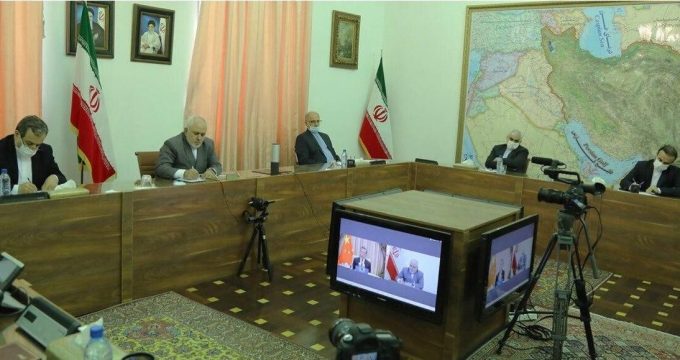 IRNA – Iranian Foreign Minister Mohammad Javad Zarif in a Chinese Twitter message referred to his phone talk with his Chinese counterpart and said they have agreed on strengthening strategic relations.

“On the eve of the Chinese Dragon Boat Festival, I was very happy to hold a video meeting with Chinese State Councilor and Foreign Minister Wang Yi,” Zarif wrote on his Twitter account.

“We reached consensus on deepening the comprehensive strategic partnership between the two countries, promoting the 25-year mutual cooperation plan, and strengthening mutual support in international affairs,” he added.

During his phone call with Wang Yi, Zarif praised the successful performance of China in fighting COVID-19 and described mutual supports as a new opportunity for showing empathy.

Both sides discussed developments in bilateral ties, escalation of US unilateralism, and the latest condition of Iran nuclear deal known as the Joint Comprehensive Plan of Action (JCPOA).

Zarif slammed intervention of the US and some Western countries in internal affairs of China, saying such an approach will result in weakening international stability.

He hoped for signing a comprehensive cooperation document.

He also vowed for providing facilities for Iranian and Chinese businessmen in the COVID-19 era.

He underlined China’s firm support for JCPOA and referred to his recent letter to the UNSC chief the UN secretary-general, saying China is against any attempt to change JCPOA articles and UNSCR 2231.