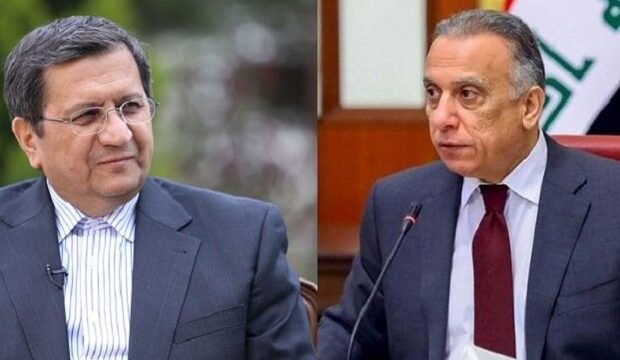 Iraqi PM vows to stand by Iran in hard times

MNA – Iraqi Prime Minister Mustafa al-Kadhimi said that Baghdad will stand by Tehran during the hard times as Tehran did the same.

He made the remarks in a Wednesday meeting with Governor of Central Bank of Iran (CBI) Abdonnaser Hemmati who is in Iraq for talks on financial and banking issues between the two countries.

Iraq will cooperate with Iran to solve the problems for payments of oil and natural gas, he said, adding that he has given the necessary orders to the relevant officials.

Hoping that the oppressive sanctions against Iran will be removed soon, he said that Iraqi officials will use Iran’s experience in the fight against challenges.

Trade is a goal of the Iraqi government although the coronavirus outbreak reduced trade, it will increase in the near future, said al-Kadhimi, stressing that all the debts should be paid in full.

Hemmati, for his part, delivered Iranian President Hassan Rouhani’s greeting to the Iraqi PM and thanked Iraq for all-out support for Iran. He said that he had had constructive meetings with the Iraqi minister of finance and the country’s Central Bank and had reached good agreements.

He said that in the past few months, there were some problems, but today it was decided to use Iran’s sources in Iraq for providing basic goods.