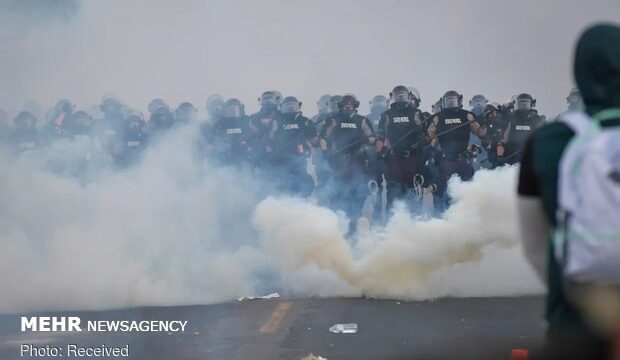 MNA – Users from across the United States are reacting to the recent nationwide protests erupted after the brutal murder of an African American by a US Police officer.

In a video footage, Derek Chauvin, 44, can be seen pinning 46-year-old Floyd to the ground with a knee on his neck for more than 8 minutes despite repeated pleas from Floyd that he cannot breathe.

The release of the video sparked anger among Americans, leading to protests across the country that has occasionally turned violent.

Police deployed tear gas, flash bombs, and batons in an effort to disperse angry protesters who defied curfews imposed by at least 25 cities Saturday night, including Chicago, Atlanta, Los Angeles, Louisville, San Francisco, and Denver. Nearly 1,400 people have been arrested across the United States in angry protests that have now spread to at least 30 cities over the death of unarmed black man George Floyd in police custody.

The National Guard was also activated in several states, including Texas, Georgia, Washington, Ohio and Kentucky.

Meanwhile, people have taken to Twitter to say their word on the unprecedented protests and violence as ‘#GeorgeFloyd’ has become a major trend in social media.

CNN reporter Sara Sinder retweeted one of her reports for the outlet where she says “This man [George Floyd] died over $20. Really?! Why do you think people are so damn angry!”

Meanwhile, writer Don Winslow criticized the inaction of the US judiciary in arresting police officers who were complicit in the murder of George Floyd:

Melina Abdullah, professor of Pan-African studies at California State University, noted that ‘violence’ is the ‘murder of George Floyd by the hands of Police’ not ‘breaking the window at Starbucks’.

Academy Award winner Robert De Niro posted two archive videos showing US Police violence against citizens, writing that “This is America,” and “This system must be destroyed.”