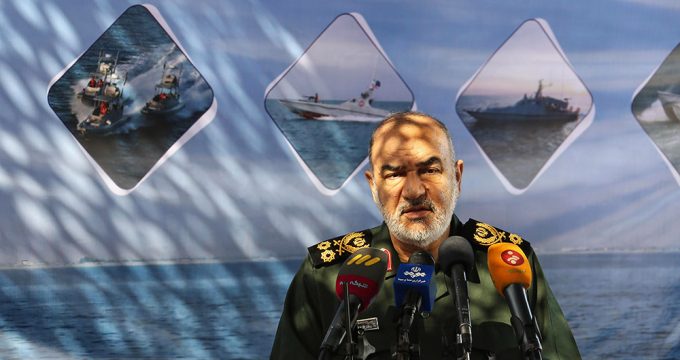 Tasnim – Commander of the Islamic Revolution Guards Corps Major General Hossein Salami warned enemies against any military adventurism targeting Iran, stressing that a major part of the Islamic Republic’s maritime power is “unknown” to others.

“The Islamic Republic has (strong) determination and will not bow down to enemies. We will never retreat (from our plans to boost our defense and missile power) as making progress is the nature of our work,” General Salami said during a ceremony in the southern Iranian port city of Bandar Abbas on Thursday morning.

He added, “Defense is our logic in war but not in the sense of passivity against the enemy. Our operations and tactics are offensive and we have shown it on the battlefield,” he said.

The IRGC commander further said the country’s maritime power is still “unknown” to others, warning, “Our enemies would see this power the day when they pursue an evil intention against this land. On that day, they will get to see the real firepower of our forces at the sea and in the sky, and the battlefield will turn into a hell for the enemies of Iran and Islam”.

The 112 vessels are fast attack craft of different types, including Zolfaqar speedboats as well as Heidar-class and Meead-class boats.

They are expected to enhance the IRGC Navy’s power and the offensive capabilities of the naval forces ensuring the security of the Persian Gulf waters.