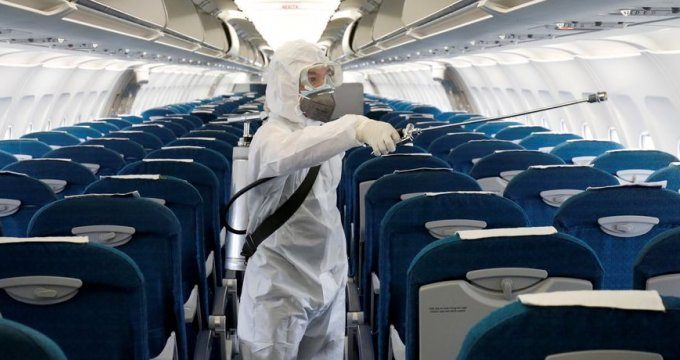 Financial Tribune – As the impact of the coronavirus and multiple government travel reactions sweep worldwide, many airlines have probably already become technically bankrupt, or are at least substantially in breach of debt covenants

Iran Airports Company’s latest report registered a total of 17,725 takeoffs and landings during the period, which indicates a 39% YOY decline.

A total of 16,453 takeoffs and landings were registered by domestic flights during the month, down 32% YOY. Close to 1.51 million passengers and 12,939 tons of cargo were transported domestically, indicating a 48% and 41% YOY decrease respectively.

On the international front, 1,272 takeoffs and landings were registered, showing a 73% decrease YOY. A total of 145,783 passengers and more than 4,329 tons of cargo were transported to and from overseas destinations to register a 79% and 69% decline respectively YOY.

The company registered a total of 367,678 takeoffs and landings for the whole of last Iranian year that ended on March 19, 2020, which indicate a 5% decline compared with the year before.

More than 44.83 million passengers were transported during the year, indicating a 5% decline year-on-year.

Over 448,481 tons of cargos were handled last year, which shows a 5% decrease year-on-year.

A total of 307,662 takeoffs and landings were registered by domestic flights during the 12-month period, down 4% YOY. More than 35.73 million passengers and 265,943 tons of cargo were transported domestically, both indicating a 3% decline YOY.

A total of 367,678 takeoffs and landings were registered for the whole of last Iranian year that ended on March 19, 2020, which indicate a 5% decline compared with the year before

On the international front, 60,016 takeoffs and landings were registered, down by 13% YOY. A total of 9.09 million passengers and 182,538 tons of cargo were transported to and from overseas destinations, down 10% and 8% respectively YOY.

Similar to previous IAC reports, Tehran’s Mehrabad International Airport was the busiest Iranian airport during the year with 120,707 takeoffs and landings, registering a 4% decline.

The airport handled 14.24 million passengers, showing a 4% decrease and around 99,993 tons of cargo, indicating a 3% decline YOY.

Mashhad International Airport was the second busiest airport with 57,865 takeoffs and landings, indicating a 4% YOY decrease. It transported 8.4 million passengers and 79,467 tons of cargos, down 5% and 8% respectively year-on-year.

IKIA ranked third on the list of Iran’s busiest airports during the 12-month period.

Domestic and foreign airlines have provided passengers refunds worth more than 8,000 billion rials [$50 million] for cancelled flights since the outbreak of coronavirus, says the spokesperson of Iran Civil Aviation Organization, Reza Jafarzadeh.

“According to the Cultural Heritage, Handicrafts and Tourism Ministry, 95% of passengers, whose flights were cancelled, have received compensation so far,” he was quoted as saying by IRIB News.

CAO spokesman’s comments come as Hormatollah Rafiei, the head of Travel Agents Guild Association, says Iranian and foreign airlines refuse to return as much as 4,000 billion rials ($25 million) worth of people’s cancelled tickets.

Last week, he issued a warning to airlines about their failure to follow the refund rules and that his association is mulling legal action against them, the Persian-language daily Etemad reported.

“Many foreign airlines have been offering vouchers and credits for future travel, which customers often must use before the end of the year, instead of honoring their obligation to give refunds,” said the secretary of the Association of Iranian Airlines, Maqsoud Asadi-Samani.

“However, I am confident that almost all Iranian airlines have provided refunds to passengers for flights cancelled due to the pandemic. For example, one of the major domestic airlines has repaid 400 billion rials ($2.5 million) to passengers.”

Iranian airlines are estimated to have sustained 30,000 billion rials ($185 million) in losses by April 3, as coronavirus has halted domestic and foreign flights, Samani said earlier.

The number of air passengers reduced by 76% and flights by 90% during the Iranian New Year holidays [March 20-April 3], he was quoted as saying by Fars News Agency.

Hamid-Reza Seyyedi, another official with the company, said IAC revenues have declined by 80%, following the suspension of domestic and international flights.

“The company has sustained losses to the tune of 2,000 billion rials [ $12 million] in the 12th month of the last fiscal year,” the official added.

The spokesperson of Iran Civil Aviation Organization says airplanes and airports are being disinfected regularly to counter the spread of coronavirus.

By the end of May 2020, most airlines in the world will be bankrupt, says CAPA—a trusted source of market intelligence for the aviation and travel industry. It noted that coordinated government and industry action is needed, if catastrophe is to be avoided.

As the impact of the coronavirus and multiple government travel reactions sweep worldwide, many airlines have probably already been driven into technical bankruptcy, or are at least substantially in breach of debt covenants.

Cash reserves are running down quickly, as fleets are grounded and the remaining ones are operating below 50% capacity.

Forward bookings are far outweighed by cancellations and each time there is a new government recommendation it is to discourage flying. Demand is drying up in ways that are completely unprecedented. Normality is not yet on the horizon, Aviation24 reported.

coronavirus, coronavirus in Iran, Iran domestic flights May 3, 2020
How to maintain peace in Persian Gulf region
Iran’s hard-liners in tug of war over parliament speakership