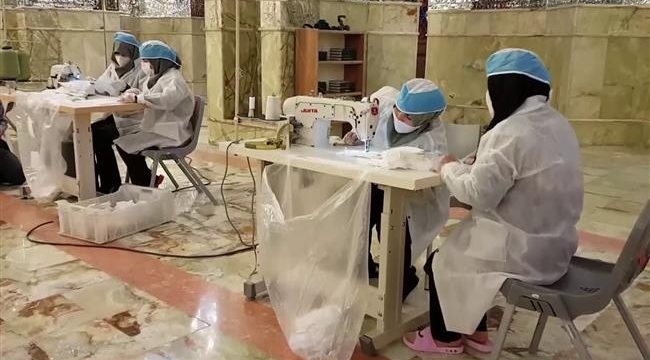 FNA – Hundreds of Basiji (volunteer) groups in different towns of Tehran province have produced over 5mln masks as the country continues fight against the coronavirus epidemic, an official said on Monday.

“670 Jihadi groups of Basij forces in the towns and cities of Tehran province are operating in the campaign against coronavirus and they have produced over 5mln masks in 134 workshops,” Head of the Basij of Construction of the Islamic Revolution Guards Corps (IRGC) in the town of Rey Majid Dehravieh told FNA.

He added that the Basiji groups will continue their services to the people until the ominous coronavirus will be defeated.

In relevant remarks last week, Commander of the IRGC Ground Force Brigadier General Mohammad Pakpour said that thousands of the force’s medical staff have cooperated with the government in the battle against the coronavirus.

“Nearly, 10,000 specialized treatment staff of the IRGC Ground Force across the country have been mobilized to continue fight against the coronavirus or they are cooperating with the universities of medical sciences and the 10 IRGC Ground Force’s treatment bases across Iran,” General Pakpour said last Wednesday.

He added that field hospitals of the IRGC Ground Force with 3,000 beds are ready to treat the patients infected with COVID-19 virus, noting that all hospitals of the force are prepared to fight against coronavirus.

“Nearly 60,000 masks, 57,000 pairs of gloves and 4,100 protective gears for medical staff have been produced in the IRGC Ground Force’s workshops,” General Pakpour said.

Spokesman of IRGC Brigadier General Ramezan Sharif said earlier this month that “in the recent days we have witnessed increase of new capacities in the number of beds for hospitalization and ICU at the hospitals of IRGC across the country”.

He added that “1000 convalescent beds have been readied for use”.

Sharif went on to say that 500 beds of Baqiatallah Hospital’s 700 beds have been dedicated to coronavirus-infected patients and, upon the order of Commander of IRGC Major General Hossein Salami, 100 beds have been added to the ones needed at ICU sections.

Referring to the continuation of biological drills and cleansing operation of environment all over the country, Sharif reiterated, “The 10 bases of IRGC ground force have focused on 3000 points in almost every province.”

“Production and distribution of disinfectants and hygiene items like face masks and gloves are being seriously carried out among people and new workshops have been added to the network of making these items… so that we have surpassed making 3 million masks per day.”

He also pointed to the role of the medical community of Basij (Volunteer) organization in the plan of national mobilization for screening, and said, “So far nearly 70 million people have been screened in the country.”

The spokesman then pointed to other measures taken by IRGC to help other organizations in combating coronavirus disease, saying, “Activities are underway with the help of IRGC and Basij (Volunteer) intelligence forces to detect depots of hygiene and medical goods.”

Sharif further said that IRGC has 9 mobile hospitals, 4 of which have been dispatched to other cities.

Speaking on the IRGC’s immobile hospitals, he said, “There are around 1700 beds at these hospitals two thirds of which have been put at the service of coronavirus patients and have hospitalized 471 patients out of which 229 were discharged”.