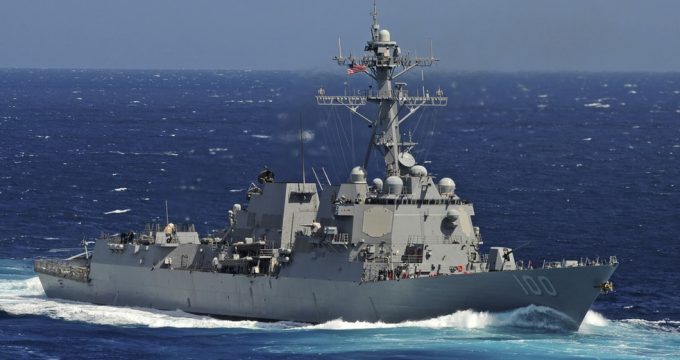 RT – The USS Kidd Navy destroyer is heading back to port after the US Department of Defense confirmed one sailor tested positive for Covid-19 and was medically evacuated from the ship.

US officials also told Reuters that there are over a “dozen” positive cases on board.

The vessel is currently operating in the eastern Pacific region carrying out a counter-narcotics mission, according to the officials. The Pentagon said the ship will be returned to port “quickly” to be disinfected, but it is not yet clear where exactly it is heading.

The outbreak on board the destroyer comes after the Theodore Roosevelt aircraft carrier faced a massive outbreak on board while operating in the Asia Pacific. The carrier eventually docked in Guam and nearly 850 of the personnel (out of 4,800) have tested positive for the virus.

So far, one of the sailors has died of “COVID-related complications” at the intensive care unit of the US Naval Hospital in Guam.

At Friday’s press briefing, a Pentagon spokesperson insisted that the Roosevelt “if needed, could pull up anchor tomorrow and head out to sea.” He added that a “small number” of sailors were symptomatic and required treatment, with four still in hospital.

The coronavirus outbreak on the Roosevelt attracted controversy after its captain, Brett Crozier, was fired for sending an email to his superior officers, begging to have the infected ship evacuated.

The latest Navy outbreak comes just days after US President Donald Trump threatened this week to “shoot [Iran’s ships] out of the water” if they threaten any US vessels. Tehran responded by saying the US should focus its efforts on fighting the coronavirus, rather than provoking Iran.