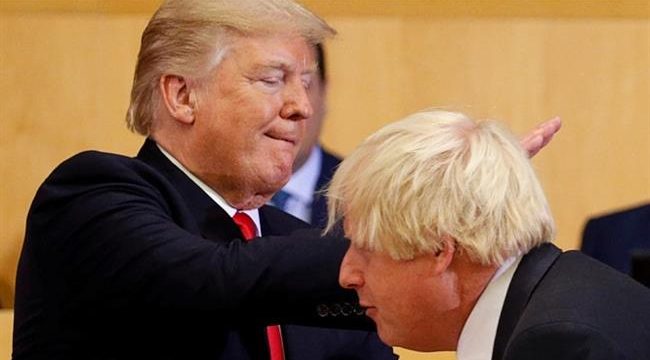 Euronews | Ian Hughes: There has only been one headline worth printing since Donald Trump was elected president. That headline is “Donald Trump suffers from a dangerous incurable narcissistic disorder which makes him incapable of empathy and reason. He is a grave danger to the US and the world.”

Instead of stating this disturbing fact, the evidence for which is voluminous, the mainstream media have over the last three years led America down the rabbit holes of normalising him and trying to understand him as you would a psychologically healthy human being. But Donald Trump is not a psychologically healthy human being and reporting on him as if he were, empowers him and disempowers people of reason. Acknowledging his pathology is fundamental to reversing this imbalance.

Although the mainstream media have largely refused to name Trump’s disordered mind, a cohort of mental health professionals have been consistently sounding the alarm. During the 2016 presidential election campaign, three psychiatrists wrote to then-President Barack Obama warning that Trump’s widely-reported symptoms of mental instability led them to question his fitness for office. Since Trump was sworn in as president, Yale psychiatrist Bandy Lee has been leading a group of mental health professionals in a concerted campaign to raise awareness of the dangers posed by Trump’s pathological mental state.

While individual characteristics of Trump’s behaviour are routinely covered in mainstream media, there has been no concerted effort to connect these disparate symptoms to this underlying pathological condition that unites and explains them all.

The condition that these mental health professionals converge upon to explain Trump’s wide range of abnormal behaviours is a disorder known as malignant narcissism. While individual characteristics of Trump’s behaviour are routinely covered in mainstream media, there has been no concerted effort to connect these disparate symptoms to this underlying pathological condition that unites and explains them all. An understanding of Trump’s dangerously disordered mind, however, demands that we join the dots between the various aspects of his extreme behaviours; particularly his narcissism, his paranoia and his incapacity to accept reality.

Individuals with pathological narcissism see others as “lesser beings” who deserve to be treated with contempt, a contempt that is ameliorated only to the degree that they can be of instrumental use to the narcissist.

One set of “dots” that illustrates Trump’s contempt for others as “lesser beings” is his disdain towards women, migrants and foreigners, the disabled and non-white Americans. To take just one example, Trump’s attacks on women reporters are long-standing and well-documented. This behaviour makes sense given that his narcissistic pathology compels him to see women as inferior. Any woman (particularly a non-white woman) asking an “impertinent” question is an affront to this superiority. His conditioned response to this violation of the natural order is fury and contempt.

Pathological narcissism also explains two other set of “dots” in Trump’s behaviour, namely his cruelty and his criminality. Cruelty is one of Trump’s core character traits, it is a central theme of Trump’s rallies and, as Adam Sewer has written, is arguably Trump’s only real, authentic pleasure. Trump’s immigration policies are explicit examples of this cruelty, including his policy on separating migrant children from their families at the border, his call to deport 800,000 ‘Dreamers’ brought to the US as children, and his plan to end a program that deferred deportation for migrants suffering from debilitating illness to countries where the treatments keeping them alive are not available.

Trump’s “criminality,” too, reflects his narcissistic assessment of himself as a “special being.” As Sewer again points out, Trump’s attitude towards the law is based upon a clear principle: “Only the President and his allies, his supporters, and their anointed are entitled to the rights and protections of the law, and if necessary, immunity from it. The rest of us are entitled only to cruelty, by their whim.”

Individuals with acute paranoia are characterised by a worldview that sees other people as inherently untrustworthy, along with an unshakable conviction that these others are out to harm them.

Paranoid conspiracy theories are a prominent feature of Trump’s mindset. As US president, he has available to him the intelligence and knowledge systems of the most world’s powerful country, but time and again, he has proven himself to be psychologically incapable of accepting what they are telling him. Trump’s psychopathology means that intelligence information that does not comport to his worldview simply cannot be processed. Divorced from the ability to fact-check the reality around him, his internal world is populated with fact-free conspiracies that fit with his emotional needs.

Trump’s distorted, paranoid view of reality shapes his policies, most notably foreign policy. A pathologically paranoid leader would be expected to recoil from alliances as inherently untrustworthy and seek to fortify their territory against internal and external threats. Trump’s major foreign policy stances are consistent with such extreme paranoia. Trump’s attacks on membership organisations, such as NATO and the European Union, reflect a paranoid conviction that such alliances cannot be trusted and will serve only to rip off the United States, a view he has expressed repeatedly. Trump’s affinity for violent authoritarian leaders is also consistent with the interpretation that they are more in tune with Trump’s own narcissistic and paranoid worldview, than the “weak” leaders of America’s major democratic allies.

A third feature of malignant narcissism is perhaps the most dangerous – and the least commented on – aspect of the condition. History suggests that leaders with this condition tend to view themselves as world figures capable of bending history to their will, and that they harbour simplistic pathological fantasies for reshaping the world in their own disordered image.

This was certainly the case, for example, with Hitler, who’s pathological narcissism fuelled his vision of Germany as a “master race” that needed to be “cleansed” of the “germs” of the disabled, foreigners and Jews. Mao, too, was a malignant narcissist, who breezily declared that half of China may have to die for him to realise his vison of China as a new society and a leading world power. “Of course, there are people and objects in the world,” Mao wrote, “but they are all there only for me.”

Given the voluminous evidence of Trump’s malignant narcissism, the debate on his mental health must consider the possibility that he, too, harbours a pathologically narcissistic fantasy.

Trump clearly believes that the world is a dangerous and threatening place, that alliances are treacherous, and that only strong nations standing alone can survive.

The outline of such a possible fantasy can be discerned thus: Trump clearly believes that the world is a dangerous and threatening place, that alliances are treacherous, and that only strong nations standing alone can survive. He appears to believe that in this dangerous world the “superior” white, Christian civilisation is existentially threatened by “invasion” of “inferior” civilisations, chiefly non-white people, Islam and China. His policies are consistent with a vision that, under these circumstances, the US must ‘purify’ itself of immigrants, build up its military strength and seek new alliances with “strong” powers in place of the “weak” nations with which it is currently aligned.

His policies are consistent with a conviction that America must therefore seek the dissolution of its alliances with NATO and its small East Asian allies, along with the breakup of the European Union, and form a new and stronger alliance with white, Christian Russia. An alliance of the US and Russia, which would command 92% of the world’s nuclear weapons, would be unassailable in any coming confrontation with Islam and China, North Korea or Iran. In this pathological narcissistic fantasy, Donald Trump would become “King of the World.”

Donald Trump is in a life or death struggle to assert his pathological values and views on the US and on the world. He has gathered around him many who share his pathology and his worldview.

As Ruth Ben-Ghiat, an expert on authoritarianism, has written, Trump has already accomplished some of the most important things an authoritarian leader must do in order to consolidate their power for the longer term. He has cultivated ties within the structures of government that are based primarily on loyalty to his person rather than to the rule of law or democratic norms. He has ignited the flames of a cultural civil war within the US that continue to benefit him by polarising the country and mobilising his base. And he has succeeded in discrediting institutions and individuals who might hold him accountable in the eyes of a substantial proportion of the American population.

It is long past time to acknowledge the truth that has been staring us in the face all along – Donald Trump is clearly mentally disordered and poses a grave danger to us all.

In the midst of the COVID-19 pandemic, the danger that Trump poses is twofold. First, his mishandling of the crisis has already cost countless lives. His paranoid, narcissistic and psychopathic characteristics are certain to mean that many more lives will be lost due to his handling of the crisis than would be the case if a president of sound character and mental health were in office. Second, there is a danger (whose probability is simply unknown), that Trump might trigger an even more catastrophic event, such as a war or the collapse of relations between nations upon whom essential global supply chains depend.

For those looking to November’s election as the safety stop that will secure all our futures, Irish journalist and author Fintan O’Tooles has issued a prescient warning: “As the cost of [Trump’s] terrible failures of public duty and common decency becomes ever more starkly evident, he will revert in his re-election campaign to an explanation of the [COVID-19] disaster, not as a consequence of his own incompetence and contempt but as a punishment inflicted on the United States for its failure to build his wall, keep out foreigners, and crush the enemy within. Like a medieval quack making a profit in times of plague, he will offer a stricken people an ever-higher dose of a toxic cure.”

It is long past time to acknowledge the truth that has been staring us in the face all along – Donald Trump is clearly mentally disordered and poses a grave danger to us all.