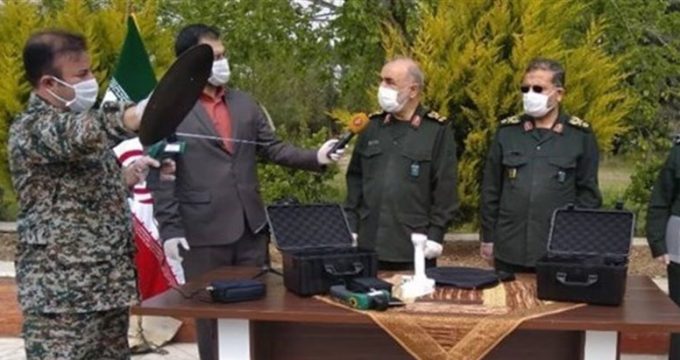 Iran’s military says it can detect coronavirus with magnetic fields

The National Interest | Matthew Petti: The Iranian military unveiled a scientifically-dubious device on Wednesday that could allegedly detect the novel coronavirus with magnetic fields.

Iran faces an unpleasant choice between shutting down a sanctions-battered economy once again or continuing to risk a second wave of deadly coronavirus infections. Wishful thinking and miracle solutions are creeping into official discourse as the government deflects criticism of its epidemic response.

Islamic Revolutionary Guard Corps (IRGC) head Maj. Gen. Hossein Salami claimed that a new device developed by Iranian scientists can detect the presence of the coronavirus on surfaces with an eighty percent accuracy within five seconds. He claims that a “bipolar virus” generates a magnetic field which detects other viruses up to a 100-meter radius.

The device appears similar to the Gopher, a novelty “golf ball detector” that was sold by fraudsters to governments around the world as a device for detecting bombs, drugs, or ivory.

Civilian officials have also sold dubious public health advice, although none as extreme as the supposed virus detector.

Deputy Health Minister Alireza Raisi defended the government’s decision not to mandate protective masks on the Tehran subway at a Wednesday press conference.

“We have to calculate the number of masks used in the country. Two million people ride the subway every day. It is not possible to give out two million masks per day,” he said. “Our recommendation is not to use public transport as much as possible. People who have symptoms also must not use these vehicles.”

The novel coronavirus has an incubation period of up to two weeks before patients show symptoms.

“The practical path is not that someone who does not own a mask has no right to ride the subway,” Raisi concluded. “It is recommended to use [a mask] but it is not impossible to ride if someone does not have a mask.”

The debate over masks is not unique to Iran. U.S. health officials had originally recommended against mass mask-wearing due to shortages, but have since begun to recommend or even mandate protective mask use in public.

But Iranian officials are also trying an unproven public health measure that few other countries in the world have: a system of “smart distancing” meant to minimize the spread of the virus while bringing economic activity back to life.

Raisi said that “social distancing must be observed” on subways and buses, and even claimed that school exams could take place with desks spaced a meter apart.

The Iranian Medical Association has warned that Iran is unprepared for the types of measures necessary to make social distancing effective.

The parliament’s independent research center warned in a Tuesday report that health authorities are not testing enough patients to determine the extent of the outbreak in Iran. The true number of coronavirus deaths may be eighty percent higher than the official statistic, and the number of infections may be ten times higher than reported.

Health ministry spokesman Kianush Jahanpur struck an optimistic tone during his Wednesday briefing, claiming that the number of daily deaths is falling.

At least 94 people died of the novel coronavirus disease (COVID-19) and 1,512 were diagnosed in the 24-hour period before Jahanpur’s press conference, out of a total of 4,777 deaths. Nearly fifty thousand patients in Iran have recovered from COVID-19, out of a total of 76,389 confirmed cases.

Dr. Alireza Zali, head of the Coronavirus Response Headquarters in Tehran, was less optimistic in an interview with the state-run Iranian Students’ News Agency.

“In a month, the effect of increasing the presence of people around the city will be witnessed in the number of cases and deaths,” he warned.