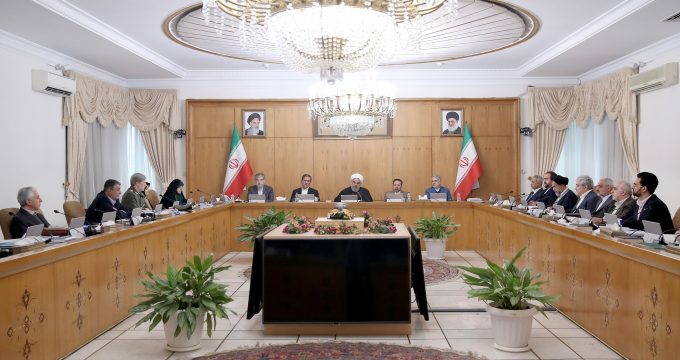 MNA – Iranian President Hassan Rouhani on Tuesday announced the details of the coronavirus rescue package which has been provisioned to help low-income households and struggling businesses that have been affected by the economic consequences of the pandemic over the past two months.

Speaking on Tuesday at a meeting of the cabinet’s economic board to review the effects of coronavirus outbreak, President Hassan Rouhani said, “The process of paying loans from 52 billion tomans to all eligible businesses in 10 categories –provided that during the fight against coronavirus, they have not laid off their workers- will be starting from mid-April and continuing until mid-June.”

“As the public is aware of the corona issue, there is a debate about the restrictions that need to be placed under the Smart Social Distancing, which will gradually and regularly inform the public about the actions that are allowed,” he added.

Iranian President continued, “In total, we have considered a package of 100 trillion tomans, which is related to the health, medicine, treatment, and medical equipment sector, and part of it is related to the unemployment insurance fund.”

“The other part is 75 trillion tomans, which will be paid in the form of loans either to the public or to businesses that have already been announced in 10 job categories that have been under more severe pressure these days, which is about 52 trillion tomans,” he said.

“There is also an amount of 23 trillion tomans that was previously supposed to be given to those who are receiving direct subsidies with a 12% interest rate. Today, part of the time of our meeting was spent discussing how to turn this 1-million-toman loan into a form of Qarz al-Hasna. It was decided that the government take over the interest rate,” Rouhani added.

“April 25 is the first day of Ramadan, and all our efforts are to be able to deposit these one million tomans into people’s accounts before April 23-24, before the first day of Ramadan,” he noted, adding, “Of course, there is a framework that is being implemented today and tomorrow, and that is to inform people that those who want to use this loan will send a text message.”

Iranian President said, “The second issue, we had announced that 3 million people living in difficult economic conditions would be paid a special subsidy for 4 months, which we paid between 200,000 tomans and 600,000 tomans. In addition to these 4 payments, a special payment will be added to these 3 million people for the holy month of Ramadan.”

“The next issue was the 4 million families that we had previously announced that a loan of 1 million to 2 million tomans would be paid to them, we decided to grant an amount more than that to them,” he added.

“The next issue is related to the 52 trillion tomans of loans that they want to receive. The sectors that were under the most pressure these days and their businesses faced problems were announced to be about 10 categories, and the ministries related to cultural heritage, tourism and handicrafts, industry, mining and trade and cooperation, labor, and social welfare are working in this field,” Rouhani noted.

President said, “These loans are different, and we have already announced that it will include those who did not lay off their laborers. If a small and medium-sized enterprise fires a worker, they will not be included,” adding, “We hope that all of this will be paid to the eligible people by the details by May 4, and in all these cases, our effort is to pay all these loans by June.”

“Another point I would like to say is that we announced that about 4 million tonnes of essentials are in customs and we were trying to find a way to get all these goods out of customs,” Rouhani continued.

Rouhani added, “People need to be confident about their basic goods by the end of the year. Our reserves and the same amount of basic goods that must be purchased for medical and pharmaceutical equipment, almost all the planning has been done and these will be made available to the people.”