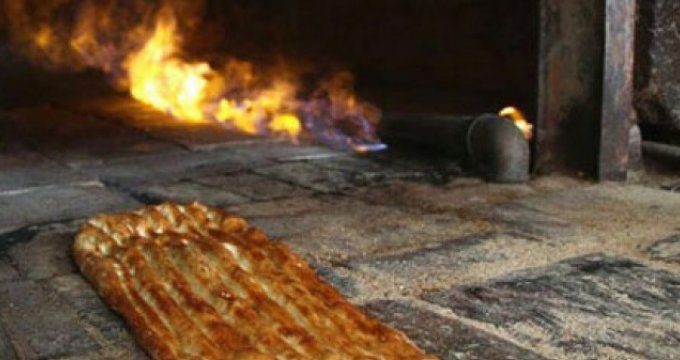 Under lockdown, Iranians rediscover the joys of baking bread

Bourse and Bazaar | Khosro Kalbasi: Iranians are staying at home, doing their part to “flatten the curve” as the country confronts COVID-19. Adjusting to confinement in a stressful and uncertain period, many have found a new pastime—baking bread.

The bustling streets of Iran’s cities are now deserted, although the country’s lockdown measures are not as strict as those in Italy or France. The government has instructed bakeries to keep normal working hours and bakers continue to be well-supplied with flour, which is heavily subsidized in Iran.

Some customers continue to line up—keeping a safe distance from one another—and many bakeries have stopped accepting cash to avoid bakers handling spare change. But many Iranians have opted to stop visiting bakeries, if only to limit their time outside.

Unable to get fresh bread each day, Iranians have turned to store-bought brands. Others have bought bread to freeze, hoping it would last them during the lockdown.

On March 13, armed forces chief of staff Mohammad Bagheri, announced that security forces would begin enforcing restrictions on intercity travel, a move many interpreted to mean that a full lockdown was imminent. Iranians rushed to stock up on essentials.

Hearing the news, Ahmad, who declined to share his last name, headed to the nearest bakery. Married and with two children, he bought stacks of bread that could sustain his family for at least a week. “At the time I thought if the government imposed a lockdown, at least we’d have bread to eat.”

Although Iranian cuisine is often associated with rice, bread is the true staple. Iranian per capita bread consumption is 160 kilograms each year—by some accounts the second highest level in the world. It should be no surprise then that the global “bread-baking boom” would reach Iran.

Nasim Moghaddam is a manager at an Iranian startup. She is immune-compromised and has been self-isolating since early March. Four weeks into her quarantine, with ample time to take on a new project, she tried her hand at baking Lavash and Barbari, two of the most popular Iranian flatbreads.

“I have always been into cooking and baking. I had even tried baking bread once or twice before. Bread-baking takes time and effort, but time is something I’ve got in abundance these days,” she said.

Moghaddam explained that baking helps her wind down during these stressful days. “Baking takes your mind off all the tensions. You need to concentrate on what you are doing or you will simply ruin what you are making.”

Maryam Keshtparvar, a psychologist, believes many Iranians are seeking ways to cope with the profound psychological effects of the pandemic. “The first priority for everyone has become the urge for survival and people feel that that they have been deprived of the many securities of modern life. This can trigger fear and anxiety,” she said.

Keshtparvar notes that as people settle into a new routine at home while they wait out outbreak, new pastimes are gaining popularity. “Some of these activities may be considered throwbacks to an earlier age. People have started growing vegetables and baking bread at home. They find themselves experimenting with soil, plants, and flour. This newfound familiarity with the elements rekindles calm in people.”

Artist Pooya Shahsiah and her husband Ehsan started baking bread a few months before COVID-19 outbreak. But they have taken their baking to new heights since beginning self-isolation. The pair have come to see baking bread as a “creative experience that has a prevailing presence during your daily life.”

Pooya recalled the origin of their hobby in an Instagram post, writing, “One day I woke up and found Ehsan trying to bake bread. A new hobby, I thought to myself, which he’d give up on soon. But he didn’t. This still comes as a surprise to me, but we have not bought bread even once over the past six months.” In the same post, she explains the basics of baking sourdough bread.

Their loaves have won fans. “We have been receiving calls from friends asking us to bake them a loaf or two,” she said, laughing boisterously. “We might even start selling bread.” The couple is currently going through as much as 8 kilograms of flour a week.

Speaking by phone, the couple explained that for them, baking has an emotional significance. “For years, Ehsan longed for the taste of bread his late aunt baked. Sourdough was the answer,” Shahsiah explained. “Some even name their sourdough starters as if they were newborn babies. We don’t, but we certainly pamper our starter.”

Posting about their baking exploits on social media, the couple was asked by friends to share their starter, which helps speed the fermentation process. “We did, just to give them a head start in the process. But I was worried that they wouldn’t take proper care of it. You need to pay attention to minuscule details. The smallest details can change the outcome.”

The pair learned how to bake by watching YouTube tutorials, accessed by VPN.

Over the past few weeks, as the coronavirus outbreak grew worse, similar tutorials have been uploaded to Aparat, Iran’s leading video-sharing platform. Even IRNA, a state news agency, has published an article entitled “How to Make Taftoon Bread at Home: An Enjoyable Pastime.”

Those who have tried it tend to agree.