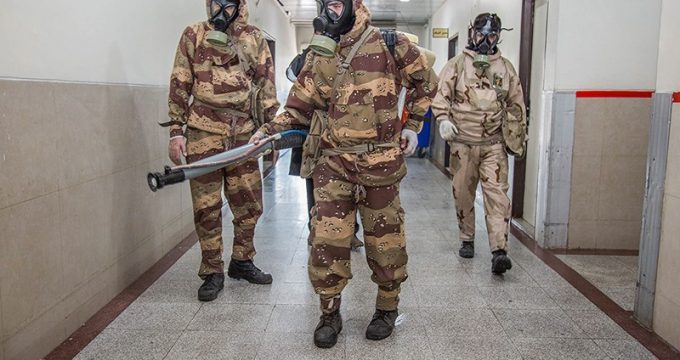 The large-scale war game that kicked off on Wednesday morning will last for three days and covers 3,000 locations across Iran, including 100 spots in Tehran.

Attended by the modern warfare units of the IRGC Ground Force and Basij, the exercise includes massive disinfection operations all over Iran.

The drill is being held in coordination with the Coronavirus Battle National Headquarters and in compliance with the policies of the General Staff of the Iranian Armed Forces.

IRGC Ground Force Commander Brigadier General Mohammad Pakpour announced on Tuesday that all medical centers of the IRGC Ground Force, including field hospitals, are used at full capacity in the exercise.

A total of 100 units of the IRGC Ground Force, under command of 10 bases, are carrying out the disinfection operations.

The IRGC has formed the Coronavirus Fight Base to coordinate efforts in the battle with COVID-19 and arrange cooperation with the Health Ministry.

The IRGC and Basij have also supplied the necessary medical equipment in the efforts to contain the virus.

Earlier this month, Leader of the Islamic Revolution Ayatollah Seyed Ali Khamenei cited clues to a possible “biological attack” on Iran in the outbreak of the novel coronavirus, ordering the Armed Forces to set up a “health and medical base” to organize the efforts to prevent the spread of the disease.

The Leader assigned the Armed Forces to work on the necessary methods to prevent a further spread of coronavirus, in addition to the other activities such as treatment of patients and establishment of medical centers like field hospitals and convalescent homes.