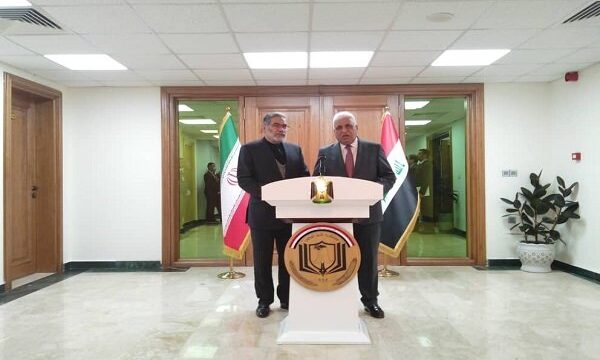 Financial Tribune – The recent visit by Secretary of Iran’s Supreme National Security Council Ali Shamkhani to Iraq indicates that Tehran still plays an important role in the Arab country, despite the hostility of its rivals, an expert said.

In an article for Iranian Diplomacy, Ali Mousavi Khalkhali added that the visit is significant from several aspects.

First, this is the first trip by an Iranian top official to Iraq following the United States’ Jan. 3 assassination in Baghdad of Major General Qasem Soleimani who was a key figure in pursuing Iran’s agenda in the neighboring Arab country.

“This can send the message to the world that despite attempts by the US and [President Donald] Trump’s administration, Iran has not been sidelined from Iraqi developments and … still plays an important role in its political processes,” he said.

This also places Iran a step ahead of the US, he added, given that no American official has visited Iraq since the assassination, to which Iran retaliated with missile attacks on American locations in Iraq, but said the ultimate revenge would be the complete expulsion of US forces from the region.

According to Khalkhali, the trip was also important in terms of the level of meetings.

“This shows he held top-level talks in Iraq and important steps are to be taken to solve its political problems,” the expert said.

Iraq is facing a political crisis with ongoing public protests over deteriorating economic conditions and state corruption, which forced Abdul-Mahdi to step down in November 2019. Attempts to appoint a new premier had failed.

Khalkhali noted that Shamkhani speaks fluent Arabic and is more likely to be welcomed by officials in Baghdad for political dialogue, because the skill is seen as a strength by Arab governments.

Shamkhani also met Iraq’s Intelligence Chief Mustafa al-Kazemi who was a candidate for the position of prime minister that many claimed Iran was opposed to.

“The meeting shows Tehran does not want to set redlines for anyone in Iraq or … interfere in its political affairs,” Khalkhali said.

During his meetings, Shamkhani only described the characteristics of an Iraqi prime ministerial candidate that Tehran considers appropriate, he added.

“[He clarified this] when he stressed the need to expel American forces from Iraq as is approved by the Iraqi Parliament and slammed the assassination of top generals of the resistance front,” Khalkhali concluded.