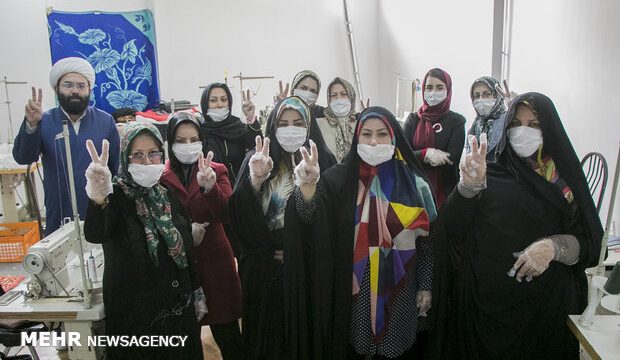 MNA – The Iranian approach to fight the novel coronavirus seems to be a bit different from the rest of the world as it has turned some homes into workshops to address the needs of the frontline.

The first cases of the virus were detected around one month ago in Qom and since then, all 31 provinces of the country are now battling with the disease with more than 12,000 confirmed cases and 611 deaths as of Saturday.

The government soon established a special task force to manage affairs. Authorities decided to shut down schools, universities, sports events, concerts, cinemas, Friday prayers, and other gatherings across the country to prevent further spread of the disease. And later, upon the order of the Islamic Revolution Leader Ayatollah Seyyed Ali Khamenei, Armed Forces of the country were tasked to establish a special base and adopt the required nationwide measures.

Also, domestic media started shedding light on the aspects of the disease and ways to contain it via different programs. As time goes on, people are becoming more aware of the outbreak and its dangers and abandon usual baseless fictions that are going around in social media.

The rise of public awareness has led to a formation of a national unity to combat the disease in a country which was usually preparing for its new lunar year and Nowruz ceremony by this time of year.

The battle with the outbreak comes as the illegal sanctions imposed by the United States is hampering the government efforts in this regard. President Rouhani penned a letter to world leaders and Foreign Minister Zarif wrote another to the United Nations, warning of the danger of illegal sanctions in weakening the country’s power over containing the disease.

However, the government is not alone in this fight as people are ramping up efforts to fight back the outbreak by taking part in various campaigns.

Soon after the shortage of protective masks and dresses were reported, hundreds of workshops were established in homes across the country to produce and hand them over to medical staff and ordinary people. This came besides more organized production offered by larger bodies such as the Defense Ministry which has set up special production lines to address the demands.

What people in their workshops produce is being distributed free of any charge and those that remember, compare the situation with the days of the Iraqi imposed war on Iran when people were busy addressing the needs of Iranian soldiers at frontlines.

Having a slight knowledge of Iranian culture, one should know the importance of Nowruz. It starts on March 21 and preparations for it begins about three weeks earlier with cleaning the houses and after all, shopping. Many retailers wait for this last month of the year to have a good sale and increase their profit but the situation has changed this year.

Most of the malls and bazaars across the country are seen empty as people prefer to stay home and postpone Nowruz shopping to a safer date. This has damaged the businesses but a new campaign has begun across the country that asks owners of the shops to not collect rents or at least consider a discount in these two months.

The campaign is starting to grow as owners in different cities including Tabriz, Shiraz, Tehran, and others are joining to mitigate the economic losses caused by the outbreak.

Although the government has not yet officially imposed any form of quarantine, people are sharing the Lets_Stay_in_Home campaign in their social media platforms to do their share in this battle.

Disinfecting public places is a fair measure to contain the outbreak especially in cities that have a significant number of confirmed cases. Again here we see the role of the public in securing the community’s health.

Now in most of the cities, people are mobilized mainly by Basij, to do regular disinfection of streets. There are lots of videos out in the media showing teams that come to the streets every night, eying no profit other than ensuring the health of their compatriots. The following video shows Basij forces who disinfect different regions of Tehran every night.

There is also another interesting video out there, depicting farmers of a village near Shahre Kord, Chaharmahal and Bakhtiari Province, who use their agricultural spraying equipment to get rid of viruses in their community.