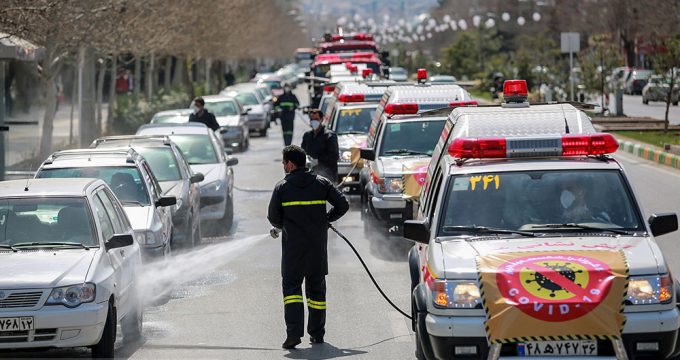 AP | NASSER KARIMI and JOSEPH KRAUSS: Iran’s official leading the response to the worst coronavirus outbreak in the Middle East on Sunday acknowledged that the pandemic could overwhelm health facilities in the country, which is under severe U.S. sanctions.

Muslim authorities, meanwhile, announced that the Al-Aqsa mosque in east Jerusalem, the third holiest site in Islam, would be closed indefinitely due to concerns about the outbreak, with prayers continuing to be held on the sprawling esplanade outside.

Similar measures have been taken at the nearby Western Wall, the holiest place where Jews can pray, where outdoor prayers continue but only 10 people at a time are permitted in enclosed areas, in keeping with measures taken by the Israeli government.

Iran is battling one of the worst outbreaks outside China. On Sunday the Health Ministry reported 113 more deaths, bringing the country’s death toll to 724 amid 13,938 confirmed cases. The real number of infections could be even higher, as questions have been raised about the government’s transparency.

“If the trend continues, there will not be enough capacity,” Ali Reza Zali, who is leading the campaign against the outbreak, was quoted as saying earlier by the state-run IRNA news agency.

Iran is believed to have around 110,000 hospital beds, including 30,000 in the capital, Tehran. Authorities have pledged to set up mobile clinics as needed.

Zali also acknowledged that “many” of those who have died from the COVID-19 illness caused by the virus were otherwise healthy, a rare admission by local authorities that the virus does not only prey on the sick and elderly.

Health Ministry figures show that while 55% of fatalities were in their 60s, some 15% were younger than 40.

For most people, the virus causes only mild or moderate symptoms, such as fever and cough. For some, especially older adults and people with existing health problems, it can cause more severe illness, including pneumonia. Most people recover in a matter of weeks.

In Iran, the virus has infected a number of senior officials, including the senior vice president, Cabinet ministers, members of parliament, Revolutionary Guard members and Health Ministry officials.

Authorities have nevertheless been slow to adopt measures taken by other hard-hit countries. Iranian President Hassan Rouhani on Sunday ruled out a general quarantine and said the government was working to keep the borders open.

Dalia Samhouri, a senior regional official with the World Health Organization, said both Iran and Egypt, two of the most populous countries in the Middle East, were likely underreporting cases because of the nature of the virus, which can be spread by individuals who show no visible symptoms.

“We can easily say that the current figures are an underestimation of the actual figures,” she said.

Iran has struggled to respond in part because of crippling sanctions imposed by the Trump administration after the U.S. withdrew from the 2015 nuclear deal. The U.S. says it has offered humanitarian aid but that Iran has rejected it.

Countries across the Middle East have imposed sweeping travel restrictions, cancelled public events and in some cases called on non-essential businesses to close for the coming weeks.

In the skyscraper-studded city of Dubai, a global business and travel hub in the United Arab Emirates, authorities announced on Sunday that all movie theaters, arcades and gyms would be closed through the end of the month.

Abu Dhabi, the capital of the UAE, also shut down its amusement parks and museums through the end of the month, including Louvre Abu Dhabi.

Al-Aqsa is the latest in a series of religious sites where access has been halted or strictly limited. Saudi Arabia has halted the umrah pilgrimage to Mecca and Medina and could be forced to limit or cancel the much larger haj later this year. On Sunday, it announced the temporary closure of all mosques and called off Friday prayers.

Sheikh Omar Kiswani, the director of the Al-Aqsa mosque, said Sunday that the closure of the mosque and other buildings on the compound, including the iconic golden Dome of the Rock, would continue indefinitely.

The religious site is also the holiest in Judaism because it was the location of the two Jewish temples in antiquity. Israel occupied and annexed east Jerusalem in the 1967 war in a move not recognized internationally. The Palestinians want east Jerusalem to be the capital of their future state, and the religious site has often been a flashpoint in the decades-long conflict.

Israel imposed sweeping travel and quarantine measures more than a week ago but has seen its number of confirmed cases double in recent days, to around 200. On Saturday, the government said restaurants, malls, movies, gyms and daycare centers would close. Schools and universities have already been shut down until next month.

Prime Minister Benjamin Netanyahu’s trial on serious corruption charges, which was supposed to begin this week, was postponed for two months due to restrictions on public gatherings.

Netanyahu has meanwhile been pressing for an emergency unity government with his main rival, former military chief Benny Gantz, following three inconclusive elections and more than a year of political deadlock. Gantz has appeared open to the idea.

Jordan, which had previously reported just one infection in a man who later recovered, confirmed six new cases. Four are French tourists while the other two are Jordanians, Health Minister Saad Jaber said Sunday.

Jordan has suspended all flights into and out of the kingdom except for aid workers and diplomats, and has closed schools for two weeks. It has also banned the smoking of hookahs, or water pipes, in cafes.

The Associated Press receives support for health and science coverage from the Howard Hughes Medical Institute’s Department of Science Education. The AP is solely responsible for all content.