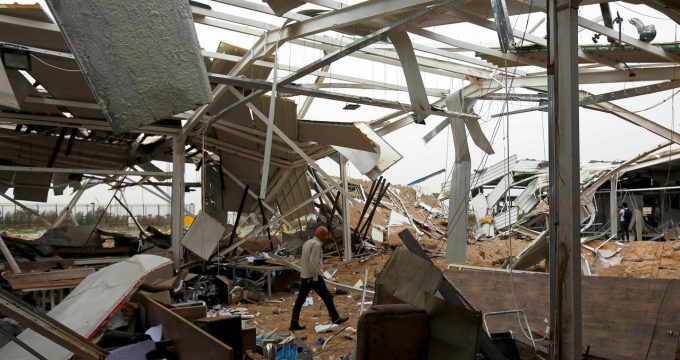 Reuters – Iraq condemned overnight U.S. air strikes on Friday, saying they killed six people, and warned of dangerous consequences for what it called a violation of sovereignty and targeted aggression against the nation’s regular armed forces.

President Barham Salih said repeated such violations could cause Iraq to unravel into a failed state and revive the Islamic State militant group. Iraq’s foreign ministry announced plans to bring a complaint to the United Nations.

The United States defended the air strikes, saying all five targets were legitimate and stored Iranian-supplied weapons used by the Kataib Hezbollah militia to attack the U.S.-led coalition. Washington launched the strikes in retaliation for a rocket attack on Wednesday on a base north of Baghdad that killed U.S. and British troops.

“These locations that we struck are clear locations of terrorist bases,” said Marine General Kenneth McKenzie, head of the U.S. military’s Central Command.

“If Iraqis were there and if Iraqi military forces were there, I would say it’s probably not a good idea to position yourself with Kataib Hezbollah in the wake of a strike that killed Americans and coalition members,” he told a Pentagon news briefing.

The Iraqi military warned the air strikes would have consequences while the foreign ministry said it summoned the U.S. and British ambassadors.

Long-standing antagonism between the United States and Iran have mostly played out on Iraqi soil in recent months, stoking deep-seated tensions between elements of Iraqi society who oppose the U.S. military presence and those who see U.S.-led coalition support as vital to preventing the resurgence of Islamic State militants.

“The pretext that this attack came as a response to the aggression that targeted the Taji base is a false pretext; one that leads to escalation and does not provide a solution,” Iraq’s Joint Operations Command said in a statement.

The civilians killed and wounded were construction workers at an airport building site in the Shi’ite Muslim holy city of Kerbala, Iraqi religious authorities said.

McKenzie acknowledged that a structure had been hit near the Kerbala airfield but said it was being used to store weapons.

“That was a clear target,” he said.

Around 5,000 U.S. troops remain in Iraq, most in an advisory capacity, as part of a wider international coalition formed to help Iraq drive back and defeat Islamic State militants.

But the Iraqi military said the new U.S. air attack went against “any partnership” under the coalition. “It will have consequences that subject everyone to the most serious dangers.”

Iran’s foreign ministry said on Friday that the “presence and behavior” of U.S. and allied forces in Iraq was to blame for attacks against them.

Iranian-backed paramilitary groups have regularly rocketed and shelled bases in Iraq that host U.S. forces and the area around the U.S. Embassy in Baghdad.

Many Iraqis say it is they who stand to suffer most from U.S.-Iranian tensions and some, including caretaker Prime Minister Adel Abdul Mahdi, have called for U.S. troops to withdraw.

McKenzie said he was confident the United States would be able to keep troops in Iraq.

He added that while the latest U.S. strikes would deter militia from waging similarly deadly rocket attacks, the risk from Iran and the groups it backs remained high.

“I think the tensions have actually not gone down,” he said.

Parliament passed a resolution calling for all foreign troops to leave after Soleimani was killed. The recent air strikes could see those calls renewed.

Iraq has suffered decades of war, sanctions and sectarian conflict, including the U.S.-led invasion of 2003.

Iraq is grappling with anti-government unrest in which almost 500 people have been killed since Oct. 1.

It also faces an unprecedented power vacuum after Abdul Mahdi stood down from most of his duties and his designated successor withdrew his candidacy.