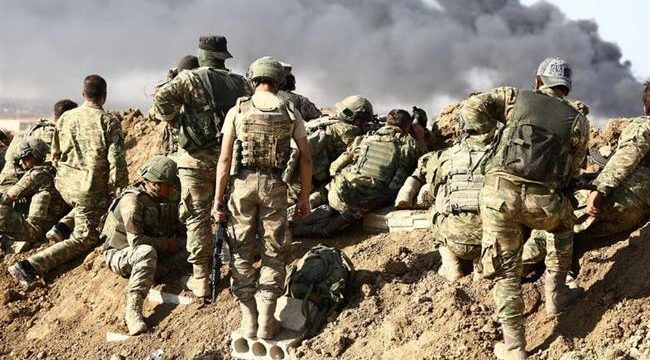 Press TV – An Iranian military advisory center in Syria has urged Turkey against further escalation of its aggression against the Arab country, reminding Ankara that it has so far refrained from responding to Turkish attacks.

In a statement published by most Iranian news agencies Sunday, the center said it “demands that the Turkish forces behave wisely, taking the Syrian and Turkish nations’ interests into consideration.”

“We assert to the Turkish nation that their sons have been within our range for a month now, and we could have taken revenge, but refrained from doing so on the orders of our commanders,” it added.

It also asked Turkish people to pressure their officials into committing to the standing de-escalation agreements on Syria and thus prevent wider bloodshed.

Ankara has begun directly intervening against Syrian forces as part of a bid to help terrorist groups that are halting Damascus’ advances in Idlib.

Syria’s ongoing offensive in Idlib was launched in August 2019 to oust terrorists from their last major bastion in the Arab country after repeated attacks on Syrian and Russian positions.

Under a deal reached between Turkey and Russia in the Black Sea resort of Sochi in September 2018, Turkish troops were deployed in Idlib and set up observation posts there.

The agreement required Ankara to oust Takfiri terrorists from the northwestern Syrian province. But, more than a year into the Sochi deal, foreign-backed terrorists rule supreme in Idlib in close proximity to the Turkish troops.

Turkey is evidently upset by changing conditions on the ground in the wake of the Syrian army advances. It has deployed massive troops and military equipment in recent weeks to stop Syrian troops from ousting terrorists.

Iran began lending military advisory support to Syria at Damascus’ request after the Arab nation found itself in the grip of terrorism fueled by foreign countries, including Turkey, in 2011.

The advisory center recounted how Turkish warplanes had started targeting its members and facilities with volleys of fire and precision missiles after it began assisting the Syrian military.

Early Saturday, the center said, it issued a directive that would prevent the targeting of Turkish positions in Idlib. The Turkish military, nevertheless, kept up its artillery fire against the center’s facilities, it added.

The Iranian outpost said Turkish-backed armed groups began attacking the Syrian military after the center helped it liberate the M5 motorway that links the Syrian capital Damascus to the major western cities of Hama, Homs and Aleppo.

The advisory center said it had dispatched negotiators to the Turkish military to press it on stopping the aggression and insisting on the resolution of the crisis through diplomatic channels.

The Turkish military did not heed the request, sustaining its fire to the point that it led to “the martyrdom of several of our combatants,” it noted.

The outpost insisted, though, that it would stand by the Syrian government, nation, and military to preserve the Arab country’s sovereignty and oust all terrorists.

On Sunday, bodies of 12 defendants of a holy shrine in Syria killed in Idlib were laid to rest in the Iranian city of Qom.

Thousands of mourners also attended a funeral procession and a subsequent burial ceremony in the Lebanese capital of Beirut in honor of five Hezbollah members killed during Turkish attacks in Idlib Friday.

They died in strikes on a military convoy in the Jabal al-Zawiya area and a base near Maaret al-Numan city, the so-called Syrian Observatory for Human Rights said.

The report came hours after Turkey shot down two Syrian warplanes, in an escalating offensive against the Damascus government in Idlib.

Following weeks of violence in the province, Turkey confirmed a full military operation against Syrian forces after 34 Turkish soldiers were killed last week in an airstrike blamed on Damascus.

Russia has said the Turkish soldiers were killed outside the de-escalation zone among “terrorists.”

A military source also said the army had shut the airspace over the country’s northwest, warning that any intruding aircraft would be brought down.

The Russian Defense Ministry also said Moscow could not guarantee the safety of Turkish planes flying in Syria, the TASS news agency reported.

“In these conditions, the leadership of Russia’s military contingent (in Syria) cannot guarantee the safety of Turkish flights in Syrian skies,” TASS cited Counter Admiral Oleg Zhuravlev as saying.