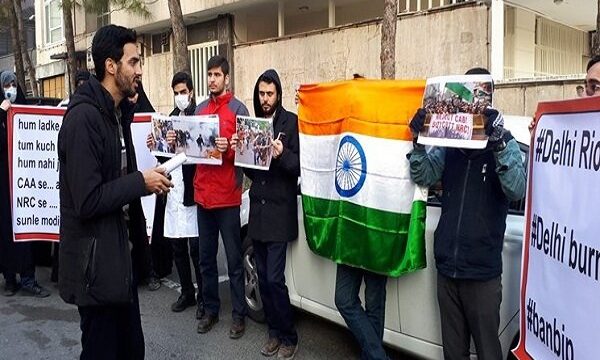 University students rally in front of Indian embassy in Tehran

MNA – A number of Iranian university students held a demonstration on Saturday in front of the Indian embassy in Tehran to condemn its government’s actions against Muslims in the country.

The demonstrators condemned extremists’ activities against Muslims, killing of 20 Indian Muslims and setting fire to four mosques in India.

The students also protested the recent developments in India and the passage of a law by the Indian government which refuses to grant citizenship to Muslims in other countries.

Hindus have been clashing with Muslims in the Indian capital since Sunday. The clashes erupted when Hindus confronted Muslims protesting a citizenship law introduced by the government of Prime Minister Narendra Modi.

Critics of the law say it is biassed against Muslims. Under the law, migrants from Bangladesh, Pakistan, and Afghanistan will be allowed to claim Indian citizenship, but not if they are Muslims.

On Tuesday, a Hindu mob set a mosque on fire in the Ashok Nagar area of the capital.

India has been engulfed by protests since early December last year when the country’s parliament passed the citizenship act. But the recent riots in the capital mark the first major instances of violence related to the law.

The latest outbreak of violence coincided with the visit of Trump, who held bilateral meetings with Modi in New Delhi on Tuesday.

Modi’s government is accused of encouraging religious intolerance and seeking to transform India into a Hindu state. Trump has been facing accusations of religious bigotry and racism at home for his travel ban on several Muslim-majority countries.