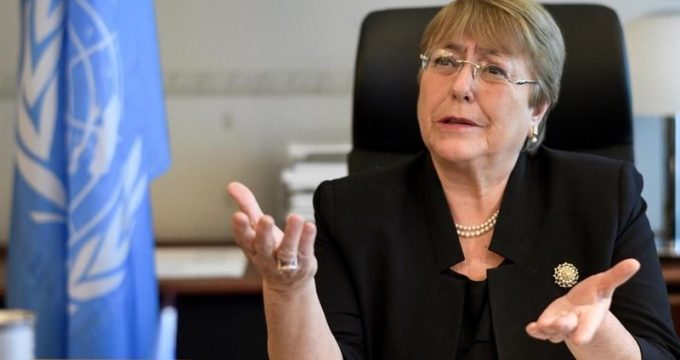 Tasnim – A petition that Iranian people have signed against the US after the American assassination of top commander Lt. General Qassem Soleimani was submitted to United Nations High Commissioner for Human Rights Michelle Bachelet.

In a meeting with Bachelet, the head of the Iranian Judiciary’s High Council for Human Rights, Ali Baqeri Kani, submitted the petition signed by thousands of demonstrators in Tehran during a February 11 rally marking the anniversary of victory of the Islamic Revolution.

The petition strongly condemns the US’ criminal move to assassinate Lt. General Soleimani, demanding that international organizations bring the organizers and perpetrators of the crime to justice.

In the meeting with the UN High Commissioner for Human Rights, the Iranian Judiciary official also denounced the US opposition to the Islamic Republic’s progress, saying Americans have denied the Iranian nation’s access to sensitive technologies and to “the right to development”.

The US’ cruel sanctions against Iran have also blocked the export of medicine to Iran, Baqeri Kani deplored, saying Washington practically seeks to deny the Iranians the “right to life”.

He also took a swipe at the European states which initiated a human rights resolution against Iran at the UN Human Rights Council, saying those European governments have on the one hand aided and abetted Saudi Arabia in the massacre of Yemeni children, and, on the other hand, are accomplices of the US in the deaths of innocent Iranian children by blocking the delivery of medicine to Iran.

For her part, Bachelet said she has condemned the US assassination of Lt. General Soleimani, adding that she would convey the request made by the signatories of the petition to the United Nations Secretary General.

She also decried the “inhumane and unacceptable” sanctions against Iran, saying, “The Office of the High Commissioner (for Human Rights) is the only United Nations institution that has adopted stances against the sanctions in its report.”

The former Chilean president also noted that politicization of human rights is a bitter fact that could not be concealed.