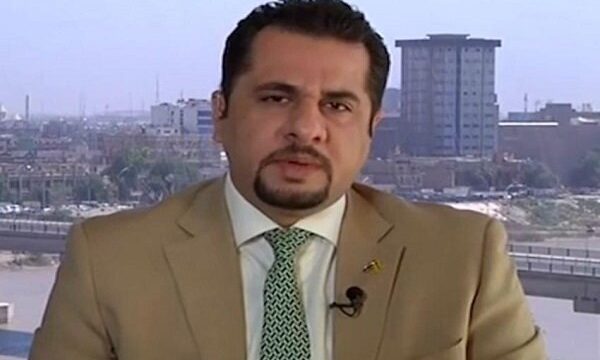 US seeks to stay in Iraq by any means: Iraqi politician

MNA | Fatemeh Salehi: A member of the Political office of the National Wisdom Movement in Iraq Fadi al-Shammari emphasized that the United States is trying to stay in Iraq by any means possible, but Iraqis are aware of this plot.

It may be argued that the most significant event after the martyrdom of Lt. General Soleimani and his comrade Mahdi al-Mohandes by US terrorist forces was the issue of ousting US troops from the region, especially Iraq.

The Iraqi government and parliament currently insist upon the expulsion of the US forces from their country more than ever after the assassination of Lt. General Soleimani.

However, US is doing whatever in its power to circumvent the legislation of Iraqi government and parliament and delay the process of withdrawal from Iraq. One of the pretexts used by US to stay in Iraq is the issue of replacing US troops with NATO forces in the country.

Referring to legal mechanisms to drive US troops out of Iraq, Fadi al-Shammari noted, “After the assassination of Lt. General Soleimani and Mahdi al-Mohandes by US, a legislation was passed by the Iraqi parliament based on which the government is required to request US coalition to withdraw all its forces that are on military missions. The government also formed a political, diplomatic and technical team to establish legal mechanisms for this purpose.

“A number of meetings were held with US coalition representatives to agree on these mechanisms, but the process of forming the new cabinet encountered a series of delays which created difficulty for this case. We hope that necessary measures can be adopted in the coming weeks. This is a very sensitive issue for Iraqis and decision makers in the country. Iraq has repeatedly stated that it does not want to be included in the ongoing conflicts in the region, as it is facing critical conditions and challenges”, he added.

“There are many political, economic, technical, and security issues regarding the expulsion of US troops from Iraq, and this case requires broad agreement with all the parties to maintain Iraq’s sovereignty and power and also its friendship with the international community. We do not seek war, we advocate peace and strive for it and believe that this case will be handled through legal and diplomatic channels with least damage to Iraqi policies”, he maintained.

Answering a question about the stance of political groups and Iraqi government regarding the expulsion of US troops, he said, “Unless all the stances are consistent with the logic of Iraqi sovereignty, we will not see stability in the country. Unfortunately, we are witnessing a parallel sovereignty in Iraq and the existence of massive weapons in the country and the lack of a united decision making. If we do not work together, our efforts will result in failure. The Iraqis have shown great sacrifices in the fight against terrorism, foreign interventions and conspiracies against the country.”

He went on to say that weapons must only be held by the Iraqi government. Moreover, armed forces such as Hashd al-Shaabi must be strengthened according to the constitution and this is the only way to create a united Iraq.

Regarding the replacement of US troops with NATO forces and stance of Iraqis on the issue, he highlighted, “Yes, US is trying in every way to have a large and effective presence in Iraq and cover its failure and also evade the fact the Iraqis are against their presence in their country. We are aware of these actions and are therefore working to safeguard the interests of our country and avoid sanctions.”

He further pointed to Iran-Iraq relations as two significant regional countries and noted, “There is a political, social and Islamic coalition between Iran and Iraq which cannot be broken. No one can take advantage of the differences between the two countries. Both countries need to boost bilateral relations and cooperation to achieve stability in the region. The potentials for strengthening collaborations have not been fully explored.”

Regarding a question about the efforts made by some foreign parties, especially US to provoke disagreement between Iran and Iraq, he maintained, “The United States and some neighboring countries have tried to undermine Iran-Iraq relations by applying pressure and many unethical methods, however, their attempts ended in complete failure since the interests of the two countries are intertwined. Of course, these efforts continue and will not stop.

Fadi al-Shammari, Soleimani assassination, us troops in Iraq February 25, 2020
Iran’s CB says not discomfited by forex volatility
There is a way out from FATF blacklist