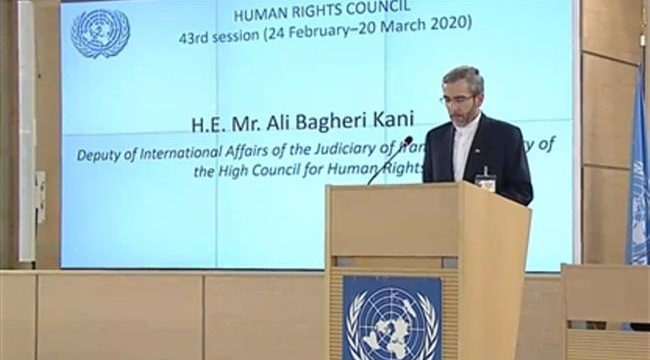 Press TV – The head of the Iranian Judiciary’s High Council for Human Rights says countries imposing sanctions on supply of medicine to Iran are “murderers of human beings” and lack qualification to be members of the UN Human Rights Council (HRC).

Ali Baqeri-Kani made the remarks while addressing the 43rd session of the Human Rights Council in Geneva, Switzerland, on Monday, where he described the unilateral sanctions imposed by the United States on Iran as the “most recent grave and systematic violation of human rights.”

Emphasizing that “the Iranian nation is the major victim of such a violation,” Baqeri-Kani said, “The United States has created an international sanction regime which amounts to a systematic violation of human rights at an international level.”

Refuting US claims that its anti-Iran sanctions do not cover supply of medicine, the official said, “Although the US claims that basic needs such as pharmaceutical and commodities are not sanctioned, access to the most basic human needs are blocked due to the sanctions imposed on international financial transactions and banking.”

Baqeri-Kani slammed US allies and some other countries for following the US sanctions policy against Iran and said, “To preserve their political and economic benefits, many states that may not approve such sanctions, not only have failed to oppose such inhuman treatment, but also supported these policies by succumbing to them.”

“These acts are not only the collective punishment of a nation, but also a modern method of violation of human rights, which should be put high on the agenda of the Human Rights Council,” he added.

The US returned its sanctions against Iran in 2018 after leaving a historic nuclear accord — officially known as the Joint Comprehensive Plan of Action (JCPOA) — signed between Iran and major world powers. The measures defied the agreement’s multilateral nature and the fact that it had been ratified by the United Nations Security Council.

Washington then began forcing other parties to toe its sanctions line. The three European signatories to the deal — Britain, France, and Germany — have stopped their transactions with the Islamic Republic, bowing under the pressure.

Switzerland late in January launched the so-called Swiss Humanitarian Trade Arrangement (SHTA), claiming it was aimed at facilitating the medicine trade, reportedly using the Central Bank of Iran’s credits. Swiss officials have, however, refused to clarify how such transactions would continue if the CBI ran out of credit with Swiss banks.

“We do not recognize any such so-called humanitarian channel. We do not recognize sanctions [for that matter]. Medicine and foodstuffs were never subject to sanctions in the first place so they can now create a channel [for their transfer] with much publicity,” he added.

An NGO reported in November 2019 that Iranian children suffering from a rare skin condition known as EB are losing their lives as US economic sanctions hamper the flow of vital medical products.