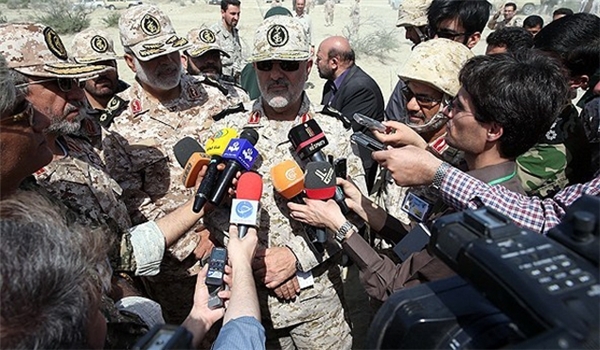 Speaking at gathering of officials from the Iranian Armed Forces in Tehran on Tuesday, Brigadier General Pakpour pointed to the moves by the IRGC Ground Force to counter terrorists in the northwestern, western, and southeastern borders of the country and said the forces have taken extensive measures, including strengthening borders, eliminating deprivation, and using indigenous forces to provide security in the areas.

He further pointed to the American and Saudi support for terrorist groups targeting Iranian borders and said, “One of the reactionary countries in the region has so far provided at least three aircraft (full of) weapons and equipment to the terrorists in the southeast of the country.”

“Despite the Americans’ all-out support for terrorists, the IRGC ground forces have been able to stand up against them and provide acceptable security along the northwestern, western and southeastern borders,” the top commander went on to say.

Tehran has already asked the two neighbors to step up security at the common border to prevent terrorist attacks on Iranian forces.

On October 15, 2018, Jaish-ul-Adl infiltrated Iran from the Pakistani side of the border and took hostage 14 border guards, local Basij forces, and the Islamic Revolution Guards Corps (IRGC) members.

The IRGC Ground Force’s Quds Base said at the time that the local Basij forces and the border regiment forces stationed at the border post in Mirjaveh region in Iran’s southeastern province of Sistan and Balouchestan had been abducted after “acts of treason and collusion” involving an element or elements of the anti-revolution groups who had infiltrated the country.

A number of the abductees have been released since then.