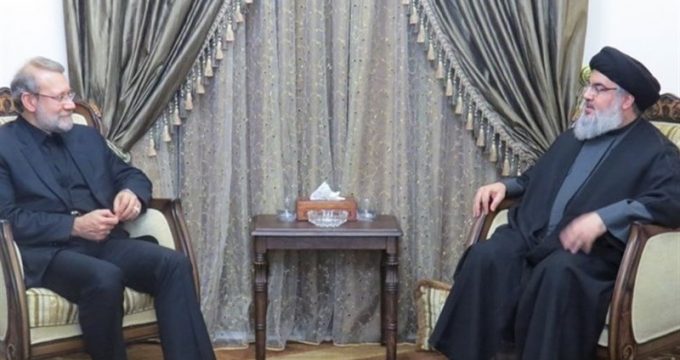 During the Monday meeting between Larijani and Nasrallah in Beirut, the two sides discussed the latest developments in the Middle East and ways to tackle political, security and economic challenges.

In his meeting with Nakhalah in the Lebanese capital on the same day, the Iranian parliament speaker reiterated Tehran’s support for the Palestinian nation and the resistance movement.

Larijani and Nakhala also discussed the dangers posed by the US-Israeli plot against Palestinians known as “the deal of the century”.

Last month, US President Donald Trump unveiled his long-delayed Middle East plan, a proposal Palestinian leaders called a “conspiracy” that “will not pass”.

In June 2018, Ayatollah Khamenei reiterated the need for a referendum among “true Palestinians of all faiths,” being Muslims, Christians or Jews, adding that such a move would lead to the establishment of the Palestinian government.

The Leader said the referendum and the subsequent formation of such a governing system would eventually translate into the destruction of the “bogus regime” of Israel in the not-too-distant future.