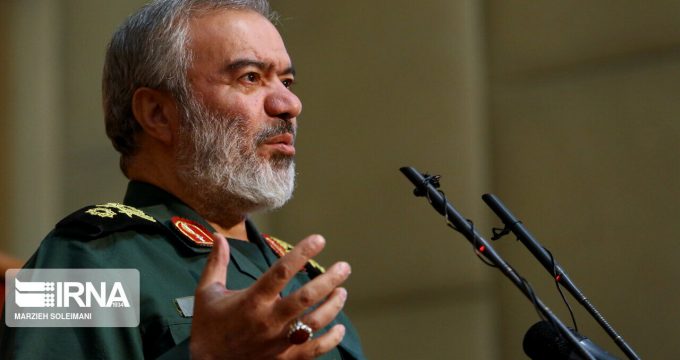 Press TV – A senior commander of the Islamic Revolution Guards Corps (IRGC) has dismissed a recent allegation leveled by the United States about the seizure of an Iranian Yemen-bound arms cache in the Gulf of Aden, saying the US makes such claims in an attempt to make up for its defeats in Yemen.

“It is possible for Yemenis to buy weapons from abroad and import them to their country and this issue is a business of the Yemenis [only],” he added, noting the US accusations against other countries are a disgrace to Washington.

Fadavi emphasized that the Yemenis have managed to defeat the vicious front of the US, Zionists, some European countries, Saudi Arabia and the United Arab Emirates, adding that some 52 countries also cooperated with Iraq against Iran during Baghdad’s invasion of the country in the 1980s.

The IRGC commander’s remarks came after the American military claimed on Thursday that a US Navy warship had seized weapons believed to be of Iranian “design and manufacture,” including 150 anti-tank guided missiles and three Iranian surface-to-air missiles.

In a statement, the military said the guided-missile cruiser Normandy boarded a dhow, a traditional sailing vessel, in the Arabian Sea on Sunday.

“US disinformation campaign vs Iran continues. Apart from absurd claims that Iranian weapons bound for Yemen were seized, US misuses a UN report to say Iran is responsible for an attack on Saudi oil facilities,” the Iranian envoy tweeted.

The allegations targeting the Islamic Republic come while the US, Britain and France, among some other Washington-aligned states, have been providing generous military, logistical, and political support for the Saudi-led war against the Arab world’s most impoverished nation.

The military support has included arming the Saudi military with precision ammunition, and deploying commandos on the Saudi-Yemeni border to try and neutralize the Houthis’ defensive maneuvers.

As part of the logistical support, the US would provide aerial refueling for the warplanes engaged in Saudi-led offensives. The American military stopped the involvement, but only after the Saudi-led coalition grew independent of it.

Tens of thousands have died and entire Yemen been pushed close to the brink of outright famine since the beginning of the 2015-present war, which seeks to restore Yemen’s former Saudi-allied officials.