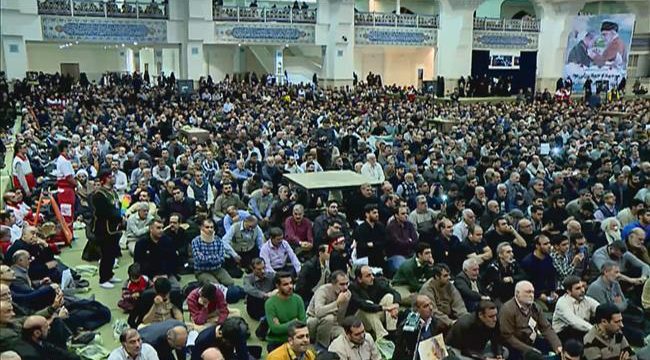 The ceremony was held on Thursday, with throngs of people as well as ranking government and military officials, including top commanders of Iran’s Islamic Revolution Guards Corps (IRGC), in attendance.

The terrorist US forces assassinated General Soleimani, the former commander of the IRGC’s Quds Force, along with Abu Mahdi al-Muhandis, deputy head of Iraq’s Popular Mobilization Units (PMU), known as Hashed al-Sha’abi in Aabic, and their companions by targeting their car on January 3.

General Soleimani, who had earned reputation as the region’s most popular anti-terror military figure, was on an official visit to the Iraqi capital when the attack took place.

Addressing the ceremony, Brigadier General Esmaeil Qaani, the Quds Force’s new commander, recited parts of Gen. Soleimani’s last will, in which he had advised the Iranian people and politicians to rally behind Leader of the Islamic Revolution Ayatollah Seyyed Ali Khamenei in order to promote the goals of the Revolution.

The top Iranian general also warned various political factions and figures to remain united in order to ward off enemies’ plots, noting that in case of division in the ranks of the nation and political officials, the country and the Islamic establishment as a whole would be damaged irreparably.

Further in the ceremony, Major General Hossein Salami addressed the audience, noting that measures taken by the martyred commander of the IRGC’s Quds Force thwarted a US plan for the creation of a new Middle East.

“During the war in Lebanon against Zionists, he was directly present in the battlefield. Living under threat was his art. He stood on the shores of the Mediterranean, so that Muslims would not be at risk…. He thwarted the Americans’ policy for creating a new Middle East,” General Salami said.

This has “forced them to build a wall around themselves. General Soleimani had locked Israel up,” the IRGC chief said.

Salami also pointed to Saturday remarks by Israel’s minister of military affairs Naftali Bennett, who had claimed that Tel Aviv and Washington had divided up the fight against Iran in Syria and Iraq.

The Iranian commander said the American and Israeli regimes were, as ever, mistaken.

“We are telling you this — and this word of ours is accompanied with action — that ‘if you take any erroneous action, we will hit you both,’” General Salami emphasized, reminding that the Islamic Republic had, time and again, warned that the Israeli regime should not rely on Washington, as it would either arrive late or not show up at all to defend Tel Aviv.

“You should [instead] definitely look to the sea, because that is going to be your eventual residing place,” he warned the Zionists.

Since General Soleimani’s martyrdom, his character has regenerated itself, breathing new life into both the regional resistance front and Iran’s Islamic Revolution, the IRGC chief noted.

“The US was dealt a slap in the face. But the big and final slap is yet to come, until the last American trooper exits Muslim territories,” he said, noting, “This reality is upon them.”

Soon after General Soleimani’s assassination, Ayatollah Khamenei said Washington was to face a “harsh revenge” for the atrocity.

The IRGC shortly unleashed volleys of ballistic missiles at the US’ Ain al-Assad air base in Iraq’s Anbar Province, which housed US forces. The Leader later described the retaliatory strikes as “only a slap.”

Speaking to reporters on the sidelines of the event, Pakpour said, “General Soleimani’s path will be pursued until annihilation of all terrorists and expulsion of the Americans from the region.”

“The Americans are terrorists, and we should know that General Soleimani stood up to them,” he noted.

The top commander added, “It was he, who began the fight against terrorism and took the final steps in some stages of that fight,” he added, referring to the former Quds Force commander’s indispensable contribution to Iraq and Syria’s overcoming the Takfiri terrorist group of Daesh in late 2017.

The people of the world have borne witness to General Soleimani’s endeavors, and saw well “who and what spectrum of people defeated Daesh,” Pakpour observed.

Also on Thursday, similar mourning gatherings were held in different Iranian cities, including the northeastern city of Mashhad.

Earlier, people in Iraq likewise held a ceremony to commemorate the 40th day since the martyrdom of General Soleimani and the PMU commander, at the site of the drone attack near Baghdad International Airport

Iraqi mourners condemned the US assassinations, calling for the immediate withdrawal of US troops from their country.

Following the assassinations, the Iraqi parliament voted overwhelmingly in favor of a bill mandating the expulsion of all US-led forces from the Arab country’s soil and former caretaker prime minister Adel Abdul-Mahdi called on Washington to provide the cooperation that was required to enable the withdrawal.