Iran’s economy is bleak. Its stock market is soaring.

The New York Times | Peter S. Goodman: The rise attests to the wealth within the country and the resourcefulness of its companies as they confront U.S. sanctions.

He looked past Iran’s cratering economy, ignored the unraveling nuclear deal and tuned out the bellicose threats of war from President Trump. Maciej Wojtal was focused on a mundane yet crucial question: Where were Iran’s people going to buy their chocolate biscuits?

Iranians were being forced to economize, trading lunch at kebab restaurants for cheap pleasures like sugary snacks. Mr. Wojtal, who runs an investment fund devoted to Iranian stocks, identified a company that was poised to benefit: Gorji Biscuit was well positioned to raise prices, given that foreign competitors were forced to steer clear of Iran because of American sanctions that restricted commerce with the country. He bought its shares and watched their value multiply more than fivefold over the course of 2019.

“You have companies that actually benefit from sanctions,” Mr. Wojtal said. “Whoever had to compete with imported goods, he’s better off.”

Born and raised in Poland, Mr. Wojtal, 36, oversees the only foreign fund that is focused on buying stocks that trade on two exchanges in Tehran. This may seem a forbidding realm of finance, a marketplace overseen by an Iranian government under siege by sanctions. To avoid American-enforced prohibitions on using the dollar to transact with Iran, Mr. Wojtal’s fund is administered in the Netherlands and operates entirely in euros. 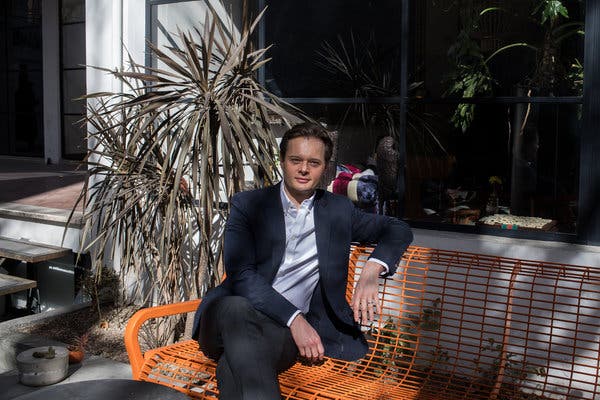 Maciej Wojtal runs the only foreign fund focused on buying stocks that trade on two exchanges in Tehran.Credit…Arash Khamooshi for The New York Times

A fund centered on Iranian equities may also seem frivolous. Who wants to buy into a country that is, by most indications, devastated by sanctions, cut off from the rest of the world economy and seething with public anger over rising prices and declining living standards?

Mr. Wojtal does. As he portrays it, obsession over sanctions misses the breadth of Iran’s economy. Sanctions have barred sales of Iranian oil, a major source of revenue for the Iranian government, though unknown volumes continue to be smuggled out of the country. Oil is such a large piece of the economy that a hit to that sector is guaranteed to produce a downturn.

But beneath that headline reality is an enticing emerging market — a nation of more than 80 million people, many highly educated, intent on transcending decades of isolation to integrate with the rest of the world. Iranians have forged fast-growing businesses in an array of industries, from petrochemicals and automotive to mining and agriculture.

These are the sorts of companies that trade on the Tehran stock market, now the bearer of an unlikely distinction: Last year, it was the best performing equity market on earth, more than doubling in dollar terms.

The run-up in Iranian equities perversely stems from the country’s status as an international pariah. With hardly any outside investment trickling into the country, and with an overall economy that has been rapidly contracting, stocks have been stuck at rock-bottom values. Even after soaring last year, many companies’ stocks still look cheap when compared with their profits. 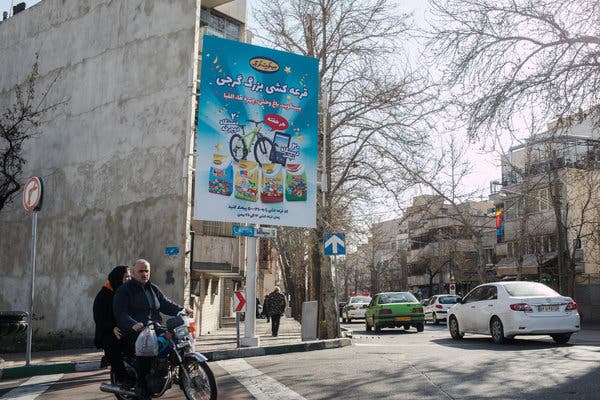 A Gorji Biscuit ad in Tehran. Mr. Wojtal’s investment fund bought shares in the company after he identified it as well positioned to raise prices.Credit…Arash Khamooshi for The New York Times

It is worth noting that the title of world’s best performing stock market tends to be captured by nations with alarming proximity to calamity, where even tentative shifts toward normalcy can drastically alter a company’s fortunes. In 2018, the IBC Caracas exchange in Venezuela produced the world’s best returns, according to countryeconomy.com. Last year, the list of contenders included Athens.

Still, the doubling of Tehran stock prices speaks to the resourcefulness of Iranian companies in evading the bite of the Trump administration’s sanctions while, in many instances, profiting precisely because of them.

“It’s an important barometer of confidence in the private sector,” said Esfandyar Batmanghelidj, publisher of Bourse & Bazaar, a news and analysis website in London that focuses on the Iranian economy and business world. “It shows you there is a lot of wealth in Iran.”

The Iranian economy is contracting at a 9.5 percent annual rate, according to the International Monetary Fund. Protests choked Iranian cities in November after an increase in fuel prices. Demonstrations exploded again last month amid anger over the government’s cover-up of its culpability in shooting down a Ukrainian passenger jet.

Some say the stock market is an aberration in a story of strife, the product of Iranian leadership’s exhorting people to entrust their savings to equities in a time of scant alternatives. 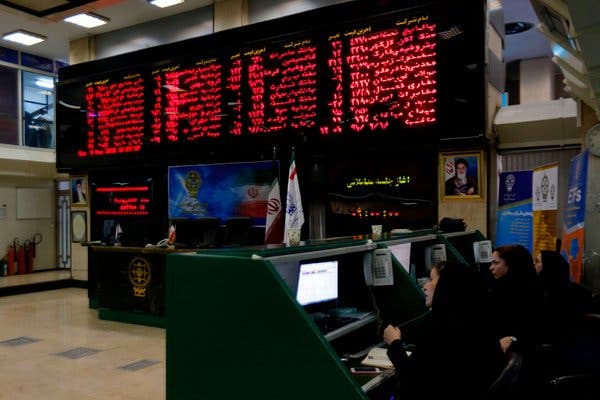 The stock exchange in Tehran. Last year, it was the best performing equity market on earth, more than doubling in dollar terms.Credit…Atta Kenare/Agence France-Presse — Getty Images

“My fear is that this doesn’t end well,” said Adnan Mazarei, a former International Monetary Fund deputy director and now a senior fellow at the Peterson Institute for International Economics in Washington. “This thing becomes a bubble.”

Mr. Wojtal revels in telling stories that challenge conventional views about Iran. On a recent day, he went snowboarding at a mountaintop resort built in the 1960s by the later-deposed shah of Iran.

“It’s absolutely amazing,” he said by phone from Iran. “This will be the major destination for skiing and snowboarding in the Middle East and Central Asia.”

An unapologetic devotee to the bottom line, Mr. Wojtal betrays no squeamishness about investing in a country run by a government that imprisons political dissenters, supports an authoritarian government in Syria and fuels by proxy a brutal war in Yemen.

“We just buy and sell shares,” he said.

He rattles off the last frontiers for global capitalism — Cuba, Venezuela, North Korea. Iran is bigger and more promising, he said.

In Poland in the 1980s, as the country threw off the strictures of Communism, his father ran one of the first international-standard restaurants in Warsaw.

Mr. Wojtal’s career began in banking — first as an equity researcher at Citigroup in Warsaw and later as a trader focused on stocks and derivatives at JPMorgan Chase in London. He worked at a hedge fund, then returned to Poland to manage an investment fund.

The trigger for his interest in Iran was the nuclear deal brokered by President Barack Obama in 2015. Iran promised to restrict its nuclear development plans while submitting to international inspections in exchange for relief from years of stifling sanctions. 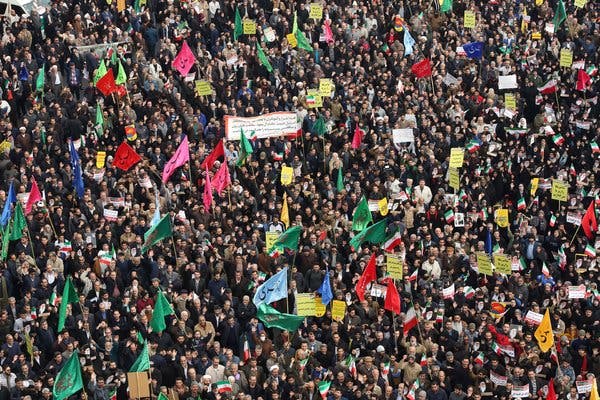 Protests choked Tehran and other Iranian cities in November after an increase in fuel prices.Credit…Abedin Taherkenareh/EPA, via Shutterstock

With an anticipated surge of international investment, Mr. Wojtal flew to Tehran to have a look. He found a stock market that had been operating for more than two decades. Its two exchanges included some 600 companies, among them makers of everyday staples like food and cleaning products.

Many companies were recording revenue growth of 30 and 40 percent per year, but their stock prices were not reflecting this. The market was full of bargains.

“It had the lowest valuations in the world,” he said.

Mr. Maciej started his fund, Amtelon Capital — which stands for Amsterdam, Tehran, London — in July 2017, stocking it with money drawn from friends and relatives. He operates out of a glass-enclosed cubicle inside a WeWork space in central London. He travels every other month to Iran, where he has another office.

Among his first buys was a glass producer. With abundant energy and seemingly endless supplies of sand — the key raw material — Iran beckoned as the best place on earth to make glass. He heard stories about Iranian producers trucking glass bottles through Turkey and on to Italy, still undercutting the price of competing products sold there. He took a stake in a company that made glass bottles for the pharmaceutical industry and was exporting them across Europe. 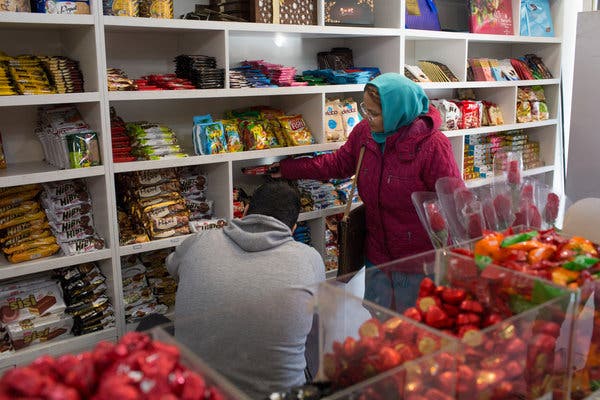 Biscuits in a Tehran supermarket. Gorji Biscuit was Mr. Wojtal’s most successful bet.Credit…Mojgan Ghanbari for The New York Times

He bought shares in a software producer that was making inventory management systems for Iranian companies, replacing the crude spreadsheets many were using. He bought into an Iranian copper miner.

Then, in May 2018, President Trump revoked American participation in the Iran nuclear deal and reimposed sanctions. Mr. Wojtal was forced to sell his largest holding, a utility that had a monopoly on selling water and natural gas in southwestern Iran. It appeared on the sanctions list.

Ordinary Iranians raced to exchange the domestic currency, the rial, into dollars, pushing its value down by about 70 percent in 2018.

For Iranian exporters, a weak currency was good news. They used rials to pay their workers and buy materials, but earned dollars on their sales. Their profits skyrocketed. So did their stock prices.

Mr. Wojtal bought shares in petrochemical companies that exported urea, an element in agricultural fertilizer, and methanol, which is used in fuel and antifreeze. He bought into companies that mined zinc and iron ore. They sold their wares in dollars to domestic producers of steel.

The Tehran skyline. Iranians have forged fast-growing businesses in an array of industries, from petrochemicals to agriculture.Credit…Mojgan Ghanbari for The New York Times

Mr. Wojtal bought shares in an Iranian company that makes toothpaste and soap. He took a stake in a manufacturer of dishwashing liquid. Both had previously competed against Chinese brands. Their earnings grew fourfold.

His most successful bet was Gorji Biscuit. Not only were Iranians snapping up its snacks, but the company was exporting one-fourth of its wares to Iraq, earning dollars.

The roughly nine million euros (close to $10 million) he now manages comes from 20 wealthy individuals from Britain, Germany, Sweden, Switzerland, Belgium and Poland. He aims to increase the fund 10 times over “as soon as possible,” he said.

Realizing that goal will entail much evangelizing about Iran.

It may also require continued adjustment to circumstances beyond his control.

“The risks are obvious,” he said. “It’s geopolitics.” 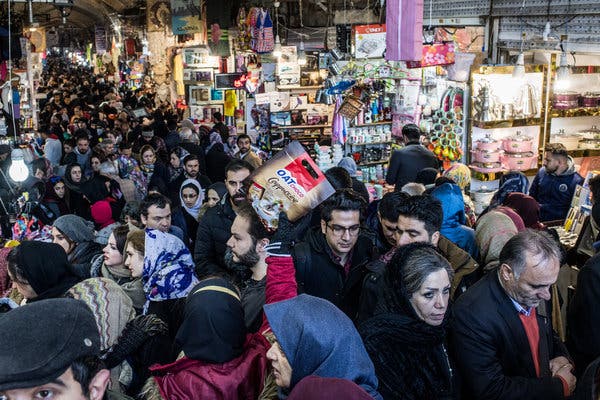 Shoppers at the Grand Bazaar in Tehran.Credit…Arash Khamooshi for The New York Times

Peter S. Goodman is a London-based European economics correspondent. He was previously a national economic correspondent in New York. He has also worked at The Washington Post as a China correspondent, and was global editor in chief of the International Business Times.