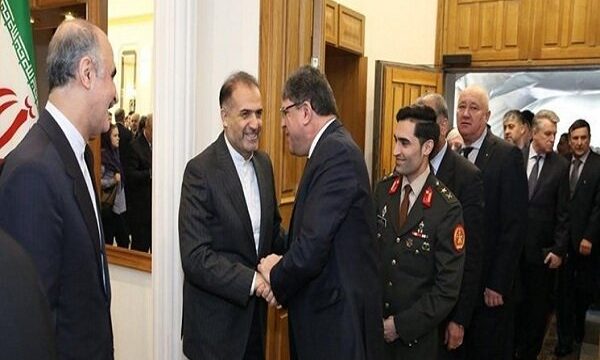 MNA – The commemoration ceremony of the 41st anniversary of the victory of the Islamic Revolution was held in Iran’s Embassy in Moscow on Tuesday.

Iranian Embassy in Russia’s Moscow held a ceremony on Tuesday to commemorate the 41st anniversary of the victory of the Islamic Revolution.

The ceremony was attended by Iran’s Ambassador to Russia Kazem Jalali, Deputy Foreign Minister Igor Morgulov, other Russian military, and government officials, foreign ambassadors and diplomats residing in Moscow, and a number of senior Iranian.

The Iranian ambassador underlined the considerable impacts of the Islamic Revolution on the country’s achievements in his speech during the ceremony, emphasizing the importance of expanding cooperation between Iran and Russia in different aspects and the necessity of developing regional cooperation between the two countries.

Referring to Iran-Russia cooperation in the fight against terrorism, he condemned US criminal activities in the region, including the assassination of Lt. Gen. Soleimani.

The Palestinian issue, the disgraceful ‘Deal of the Century’, and Iran’s stance towards this issue were other issues discussed by Jalali at the ceremony.

Congratulating the 41st anniversary of the victory of the Islamic Revolution, Russian Deputy Foreign Minister Igor Morgulov described Iran-Russia relations as progressing and developing and called the meetings of the two countries’ top officials an appropriate opportunity for the strengthening of relations.

He also emphasized the continuation of cooperation between Iran and Russia in the economic, political and cultural fields.

he Iranian Revolution also known as the Islamic Revolution was a series of events that involved the overthrow of the last monarch of Iran, Shah Mohammad Reza Pahlavi, and the replacement of his government with an Islamic republic under the leadership of the Grand Ayatollah Ruhollah Khomeini (RA).

By toppling the US-backed Pahlavi regime 41 years ago, the Iranian nation ended 2,500 years of monarchic rule in the country.

The Islamic Revolution established a new political system based on Islamic values and democracy.