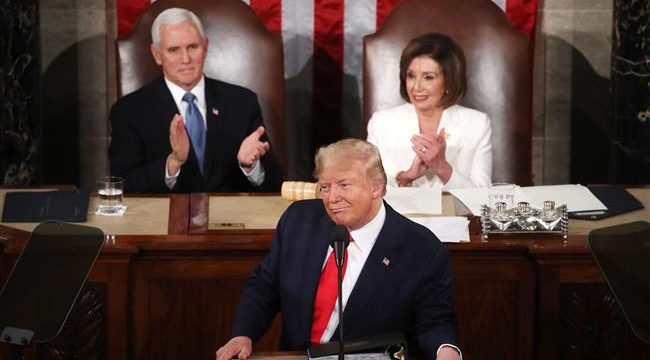 Press TV – Bitter divisions ruling the US political scene were exposed as President Donald Trump was delivering his State of the Union speech to Congress on the eve of his impeachment trial.

Trump avoided mentioning the subject of his impeachment during his 80-minute speech on Tuesday, but bipartisan tension continued to dominate the atmosphere with fellow Republicans giving the president standing ovations, while rival Democrats remained seated.

As the president took his place at the front of the House chamber for his State of the Union address, Speaker Nancy Pelosi reached out to shake his hand, which Trump refused while turning his back.

In return, Pelosi, who appeared to be taken aback, avoided citing the usual “high privilege and distinct honor” that accompanies the speaker’s introduction of the president to Congress.

All she said in introducing Trump was this, “Members of Congress, the President of the United States.”

The speaker then proceeded to rip apart a copy of Trump’s remarks behind his back after his speech was over on live television. There was also booing and several Democrats walked out.

Leaving the House floor, Pelosi said she had torn up the speech “because it was the courteous thing to do, considering the alternative.”

The speech “was a manifesto of mistruths,” she added.

“The manifesto of mistruths presented in page after page of the address tonight should be a call to action for everyone who expects truth from the President and policies worthy of his office and the American people,” Pelosi said in a statement. “The American people expect and deserve a President to have integrity and respect for the aspirations for their children.”

Trump has been on bad terms with Pelosi for long and their relationship took a turn for the worse ever since the Democratic-controlled House of Representative impeached him in December, charging him with abusing power by pressuring Ukraine to probe political rival Joe Biden, and then obstructing their congressional inquiry.

On Wednesday, the Republican-controlled Senate is set to vote on whether to remove Trump from office. The Senate is almost certain to acquit the president, as a two-thirds majority is required to remove Trump and none of its 53 Republicans have indicated they will vote to convict.