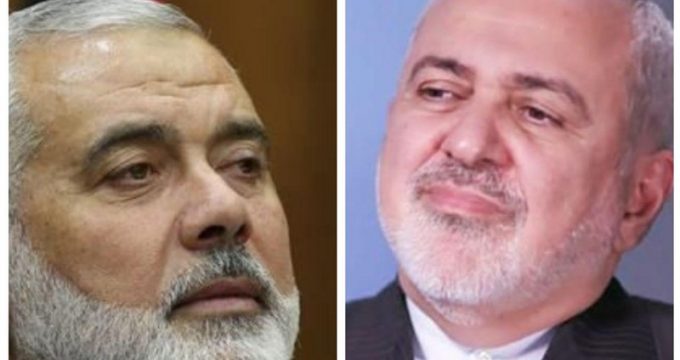 In a telephone conversation on Wednesday, Zarif and Haniyeh discussed the latest developments in Palestine and the American-Zionist plot, known as deal of the century.

Zarif vehemently condemned the inhumane plan proposed by US President Donald Trump, and voiced support for the unanimous stances of the Palestinian people and leaders in opposition to the unilateral plan.

The Iranian foreign minister also emphasized the necessity for unity and solidarity among Palestinian groups and the free nations and governments of the world in their all-out confrontation with such a major plot of the century.

He further expounded on Iran’s stances in support of the Palestinian people’s rightful and legitimate struggle against the Zionist occupiers, and highlighted the widespread popular and governmental movements against the cruel American-Zionist project.

For his part, Haniyeh pointed to the Palestinian nation’s struggles and to the unity and solidarity formed in the confrontation with the hostile plan, and highlighted the determination of the Palestinian leaders, people and resistance groups in the fight against the Zionist regime’s occupation.

He also praised the Islamic Republic of Iran for its efforts to support the oppressed Palestinian nation in the perseverance and resistance against the occupiers.

Last week, Trump unveiled his long-delayed Middle East plan, a proposal Palestinian leaders called a “conspiracy” that “will not pass”.