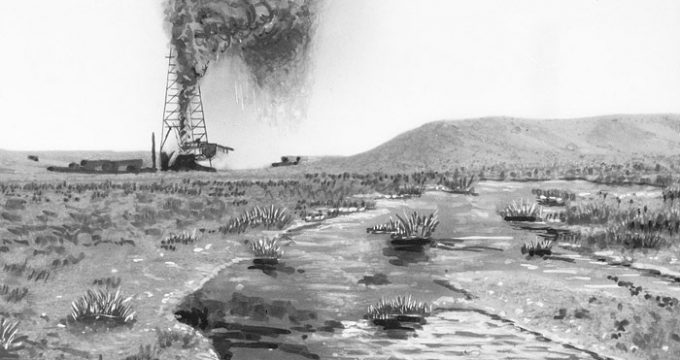 Oil figures in Iran’s contemporary history: From conspiracy to death

SHANA — Iran’s oil history has been into ups and downs. It would not be exaggeration if we say that we have had several hundred years of history throughout one hundred years of oil operation. In historical events, some persons have played significant roles, leading either to success or to failure. Some have served the country and some have turned out to be traitors. In fact, such figures make history and drive it forward. Decisions and behaviors of historical figures have been influential on Iran’s contemporary history. Getting to know this history can open a bright horizon for us. Here we review some of these figures:

Several decades before William Knox D’Arcy came to Iran to explore oil; many like Jacques de Morgan had conducted research about Iran and had written articles. The plateau of Iran was known to political and scientific circles. Among these persons was George Curzon, a noted British journalist. He smartly sought to learn about Iran’s black gold through writing articles for the Times of London, which were then published in a book.

Curzon travelled to Iran in the late 19th century and conducted in-depth research throughout the Persian territory. His well-thought-out journalist did not survive by only rich information about oil; rather, his notes about oil were related to the social history of the country particularly in the final decade of Nasser ad-Din Shah Qajar’s reign on Persia.

Anthropology and sociology have largely been used in this book which has been translated into Persian. Curzon’s precise descriptions of Borazjan, Darab, Ramhormoz, Dalaki and large portions of southwestern Iran are interesting. Curzon was styled as Lord Curzon of Kedleston between 1898 and 1911, and as Earl Curzon of Kedleston between 1911 and 1921, and was known commonly as Lord Curzon, was a British Conservative statesman who served as Viceroy of India from 1899 to 1905, during which time he created the territory of Eastern Bengal and Assam, and as Secretary of State for Foreign Affairs from 1919 to 1924.

World War I (1914-1918) was a strange conflict. Like WWII, Germany was on one side and Britain and France on the other. In WWI, the Germans and the Ottomans were united. That was while the Ottoman Empire was living its final days as it had been disintegrated. The Germans were well aware of the significance of Iran’s oil for powering military vehicles and also Britain’s military power. Therefore, Captain Otto Klein, a senior German officer stationed as diplomat, stepped into Iran’s oil sector.

What Klein was after, was a pipeline carrying oil from Naftoun to the Abadan refinery to power British military vehicles. Cutting this vital oil flow would mean a halt in the British bombing of German troops. Klein instigated some nomads to sink a vessel at the estuary of Arvandroud River so that no Iranian oil would be delivered to British troops. Klein had accomplished the mission assigned to him by the German government. He was pursuing his country’s interests in the war with Britain. However, that left significant impacts on Iran’s oil history. As a result of Klein’s actions, Britain dispatched more troops and intelligence forces to Iran’s Khuzestan. In January 1915, 12,000 British and Indian soldiers arrived in Khuzestan.

In 2000, it became known for friends and foes alike that the US was the chief orchestrator of the August 1953 coup in Iran. That removed any doubt about the US’s role in the coup which overthrew the democratically elected government of Mohammad Mossadeq. The Central Intelligence Agency (CIA) declassified its document in the New York Times about the US-backed coup. Kermit Roosevelt had said before 2000 that the coup had been engineered by the US. The coup did not let Iran’s oil industry continue  its own way.Several months following Iran’s 1979 Islamic Revolution, Roosevelt made it clear that his country was involved in the coup targeting Iran’s oil. Gholam-Reza Nejati has cited quotes from Roosevelt in his book Iran Petroleum Industry Nationalization Movement. Roosevelt said in an interview with Los Angeles Times that he had decided to break his 25-year silence and explain the US’s role in the coup. He said he had convinced the Shah that the coup was instrumental.

In the aftermath of WWII, after the then three superpowers, i.e. the United States, Britain and the Soviet Union that had occupied Iran, Communists moved to take an oil concession. As Allies were close to victory, the occupiers had to pull out of Iran. The USSR seized on the moment and refused to leave Azerbaijan in a bid to take an oil concession. Sadchikov, Russia’s then ambassador to Tehran was representing the Soviet Union. The USSR was adamant on taking Iran’s oil in a bid to create a safety belt against the Western bloc. He sought every excuse to justify his presence in Iran. One excuse he often forwarded was to protect the security of Baku oil mines. When the Russians’ controversy over the occupation of Azerbaijan reached its climax, Qavam had become prime minister in Iran. He offered to hold talks with the USSR. Sadchikov only wanted oil concession for northern Iran. Sadchikov and Qavam agreed on the establishment of a Russian-Iranian company to operate for 25 years. Sadchikov was trapped by Qavam’s oil plot. That allowed Qavam to cleanse Azerbaijan and refer the oil concession case to parliament. The parliament had a clever reaction and it did not award any concession to the Soviet Union.

Reforms and development in Iran depended on many other issues. Development was not bound to building railroads and manufacturing vehicles to road construction. Changes had to occur within all social and legal systems. That was how Ali Akbar Davar was dragged into Iran’s legal system. Davar is known as the founder of Iran’s modern legal system. The Pahlavi regime needed more petrodollar after entering the second decade of the 14th century AH. The D’Arcy Concession was then called into question. The interests from the D’Arcy Concession were so meager that the regime of Pahlavi I raised its voice.  Davar had to defend Iran at international bodies when legal action was taken against Anglo-Iranian Oil Company (AIOC). Davar was involved in the entire case initiated by Reza Shah. Davar’s speeches in the face of Britain’s then prime minister at international courts are well-known to everybody. When Davar was abroad to follow up on the case of the complaint against AIOC, Pahlavi I had already killed Teimourtash. Davar was the minister of justice, but he found that he was being framed. After several years of serving at the ministry of finance, he committed suicide.