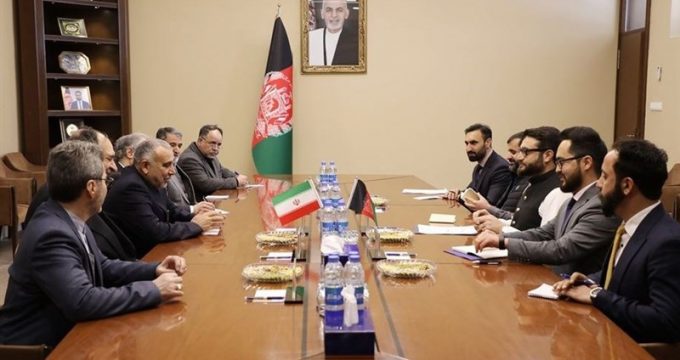 Tasnim – The Iranian Foreign Ministry’s special envoy to Afghanistan described dialogue among Afghan parties as the only way to ensure lasting peace in that country.

In a meeting with National Security Adviser to Afghanistan’s president Hamdullah Mohib, Iranian Foreign Ministry’s special envoy to Afghanistan Mohammad Ebrahim Taherian voiced the Islamic Republic’s support for law, order and peace processes in Afghanistan under the leadership of the Afghan people.

Only intra-Afghan dialogue will ensure lasting peace in Afghanistan, the Iranian diplomat stressed, highlighting Tehran’s willingness to strengthen relations with the Kabul government.

For his part, Mohib said the Afghan government maintains independent ties with the neighbors according to its own interests.

He also highlighted Afghanistan’s plan for state governmental relations with other nations, expressing hope that the neighbors and partners of Afghanistan would consider this policy and shape their future ties with Kabul by taking such principle into account.

In an address to the Ministerial Conference of Heart of Asia Countries Istanbul in December 2019, Iranian Foreign Minister Mohammad Javad Zarif voiced Tehran’s support for “an Afghan-owned and Afghan-led peace process”, stressing that withdrawal of foreign troops from the war-hit country would prepare the ground for peace and reconciliation process.

Last week, the UN Secretary-General’s Special Representative for Afghanistan Tadamichi Yamamoto highlighted the Islamic Republic of Iran’s support for the Afghan government and nation throughout the years of war in that country, and lauded Iran’s positive role in helping resolve the problems of Afghanistan.