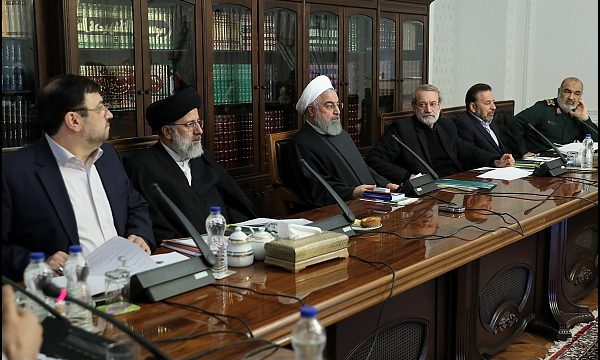 MNA – Iranian President Hassan Rouhani commemorated the anniversary of Imam Khomeini’s (RA) arrival in Iran and described February 1, 1979, as an important day in the history of the Islamic Republic of Iran.

Speaking at the session of the Supreme Council of Cyberspace on Saturday, President Hassan Rouhani said, “We will definitely continue the path of Imam Khomeini (RA) with the Supreme Leader’s guidance until we reach what the Islamic Movement and Revolution desire.”

He also referred to the return of Imam Khomeini from exile and added, “The Late Imam invited people to attend the referendum 47 days after the victory of the Islamic Revolution, and people said yes to the Islamic Republic in March 1979.”

The President said, “Although the Iranian people’s choice for the establishment was the Islamic Republic, Imam (RA) insisted that the title and political structure of the country must be put to a referendum.”

He continued, “We send our regards to the souls of all those who sacrificed their lives for the cause of the Late Imam and who were martyred in all stages to date, following the path, logic, and aspirations of Imam Khomeini, who chose courage and martyrdom, the last of whom was Martyr Lt. Gen. Qasem Soleimani. General Soleimani took the honorable path of martyrdom and was able to make a great difference within and across the region and the world.”