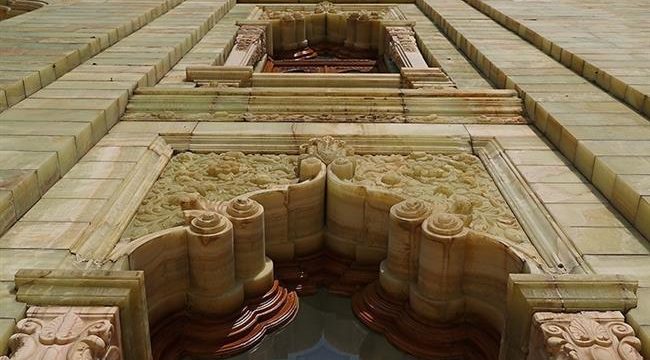 Iran to open Marble Palace to tourists after 40 years

Press TV – A century-old palace known for its pure Iranian architecture is set to open to the public after more than 40 years of closure.

A group of journalists were allowed to The Marble Palace in downtown Tehran on Sunday with a reinstated owner of the facility saying it will become a museum to attract tourists in two weeks time.

The palace, built on an order in 1934 by Reza Shah, the first of the two Pahlavi kings that ruled Iran until the Islamic revolution of 1979, has been scene to major historic events, including Reza Shah’s abdication of power after the occupation of Iran by Allied during the Second World War.

It served as an office for government authorities over the past decades until the Mostazafan Foundation took back ownership in recent months.

Pictures taken on Saturday showed the palace had remained in a good state of preservation. Its dome, which is a replica of a historic mosque in the city of Isfahan, was still shining with tiles laid by Iranian master Hossein Lorzadeh.

The Marble Palace had served as a museum in 1970-1977. It was closed as a residence for Iranian monarchs after a terror attempt on the life of Mohammad Reza Pahlavi in 1965.

Iranian and French architects contributed to the design and construction of the building. Its five-story basement has been serving as a museum for religious activities for the past years.

Reopening the palace comes as the Iranian government eyes to attract more tourists from other countries as part of plans to diversify its access to hard currencies.

Tourists from China and other Asian countries are specifically interested in historic monuments in Iran as symbols of the oriental culture of the country.