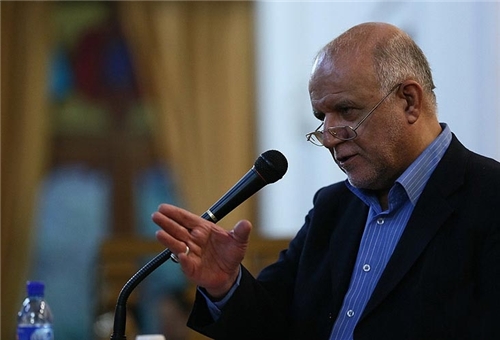 SHANA – Iranian Minister of Petroleum Bijan Zangeneh said plans were under way to enhance oil recovery factor of the Azadegan joint oilfield in the near future.

Speaking to reporters on Saturday evening following a meeting with professors of the universities which have signed deals with the National Iranian Oil Company (NIOC) for carrying out studies on oil and gas fields, Mr. Zangeneh said a new production record would be registered in Azadegan in the near future as Tehran University is to fulfill its commitment for EOR studies in the field.

He also announce production of gas from Phase 11 of the supergiant South Pars gas field by the end of the Rouhani Administration by 2021.

“The purpose of signing these contracts is to solve the problems of the fields considered in the deals and enhancing their recovery factor. This began in 2014 and has progressed despite all the ups and downs,” he said.

Referring to the participation of many professors and postgraduate students in these projects, he said: “The head of the Tehran University’s Institute of Petroleum gave a good news at the meeting that they are committed to bringing the recovery factor of the Sarvak Layer from currently 5% or 6% to a minimum of 10%, which is equal to an increase of 3.5 billion barrels of oil.”

Zangeneh continued: “Although we are facing financial problems, I believe generosity for universities will pay off.”

Petrochemical Sector on the Developing Trail

Answering a question about the performance of the petrochemical industry, the petroleum minister said, “We hope that the second petrochemical leap will be achieved by the year 2021, with the realization of which the annual petrochemical production capacity will be around 100 million tonnes and the value of the produced items will be close to $27 billion.”

He further said the projects that would reach fruition after then would be categorized in the third leap of the industry. By the end of the leap, Iran’s petrochemical production capacity is envisaged to cross 136 million tons per annum and the value of the produced items will generate $37 billion for the country.

“We have good plans in the field of gas production and soon we will break the record of production of 1,000 million cubic meters of gas per day; there is a lot of gas produced currently but consumption is high, too,” further said Mr. Zangeneh.

According to the Iranian Minister of Petroleum, Iran’s household sector currently consumes over 600 mcm/d while over 850 mcm/d of gas is being delivered to the national gas distribution network.

He said there would be supply cuts in public buildings in case consumption continued to remain high domestically. “However, we cannot cut the gas in the household sector.”

“In designing the gas network, our priority is to ensure that the household and public sectors do not suffer, and that small and large industries and power plants are our next priorities.”

In response to a question about the possibility of an OPEC emergency meeting ahead of the OPEC extraordinary meeting due in March, he dismissed that possibility and, regarding the likelihood of intensification of the output cut deal, said, “It is not still clear what decision will be made in this regard.”

Mr. Zangeneh said Petropars was currently refining its jacket structures and strengthening its calculations in this regard and was holding licensing rounds for purchasing the needed items. “We hope that by the end of the administration, we will have an initial production from Phase 11. The plan is for production of one billion cubic feet and of course part of the equipment must be supplied from overseas.”

He said that there was no plan to build a gas pressure boosting station for the time being, adding, “We are currently studying and there are various alternatives, including an offshore and onshore pressure boosters.”

Zangeneh also did not rule out a decline in gas exports to Iraq, citing technical difficulties.