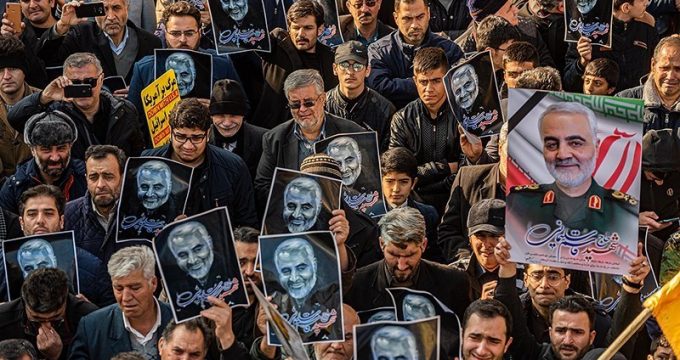 Iran: US will fail to undercut our influence through terror acts like Soleimani’s assassination

“Our influence has not been dependent on an individual and it will prove that this influence will further be strengthened with the blessings of his (General Soleimani’s) blood, and regional nations will embrace Iran’s influence and that of the resistance [front],” he said in an interview, Fars news agency reported on Wednesday.

“Those who masterminded this heinous, cowardly act thought they could undermine our regional clout and presence through the assassination of General [Soleimani], but given the current circumstances in the region they will see that this will not come true and the powerful presence of our people and establishment… will continue,” he added.

Mousavi said the US assassination of General Soleimani was a “blatant violation” of international peace and security, noting that based on UN resolution 3314, if a guest country that has a military base under an agreement with the host state commits an act of aggression against the interests of the host country, it is considered an aggressor.

He said that the administration of US President Donald Trump were of the opinion that they could take advantage of General Soleimani’s assassination to sway the public opinion but the scheme backfired and turned America’s public opinion and world nations against the US.

Through the assassination of the senior Iranian commander they were also after overshadowing Trump’s impeachment, Mousavi said.

On January 3, the United States assassinated General Soleimani, the commander of the Quds Force of Iran’s Islamic Revolution Guards Corps (IRGC), among others in a set of airstrikes against the Iraqi capital of Baghdad on Trump’s order. Soleimani has earned reputation as West Asia’s most revered anti-terror commander due to his indispensable contribution to defeating terrorist outfits such as Daesh across the region.

The strikes also led to the martyrdom of second-in-command of Iraq’s Popular Mobilization Units (PMU) Abu Mahdi al-Muhandis along with eight other Iranians and Iraqis.

In retaliation, the IRGC fired volleys of ballistic missiles on January 8 at Ain al-Assad air base in the western Iraqi province of Anbar, which housed US forces.

Leader of the Islamic Revolution Ayatollah Seyyed Ali Khamenei said Iran’s missile strike on the US base in Iraq was just “a slap.”

Despite the US denial of casualties or extensive damage at the site, reports and satellite images revealed what US media described as “extensive” damage at the base.

However, the United States military later confirmed that 11 of its troops were wounded in the Iranian retaliatory missile attack.

“While no US service members were killed in the January 8 Iranian attack on al-Asad air base, several were treated for concussion symptoms from the blasts and are still being assessed,” US Central Command spokesman Captain Bill Urban said in a statement on January 16.