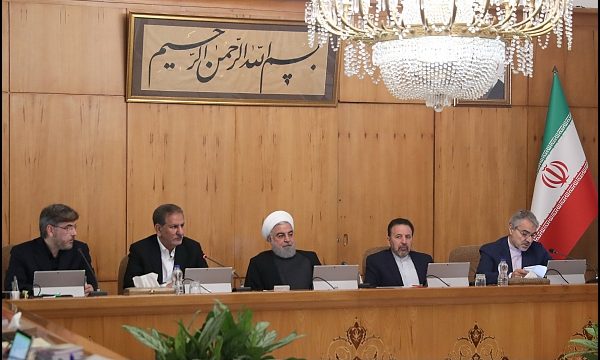 Rouhani warns US, Europe against any ‘wrong step’

Anadolu Agency – Iranian President Hassan Rouhani on Wednesday warned the U.S. and Europe against taking a “wrong” step in response to Iran’s decision not to abide by the nuclear deal, according to Iranian Mehr News Agency.

Rouhani asserted that “the U.S. and Europeans should come back to compliance [with the nuclear deal].”

The U.K., Germany, and France announced Tuesday that they would activate the dispute mechanism of the 2015 Iran nuclear deal due to Tehran’s continuous violations of the accord.

Iran announced, following the death of Gen. Qasem Soleimani in a U.S. airstrike in Baghdad, that it would no longer comply with any commitments under the 2015 deal signed with several world powers.

“If you take a wrong step, you will sustain loss, the right move is to come back to the JCPOA [Joint Comprehensive Plan of Action],” he said.

While pointing out to the regional unstable situation, he said: “This insecurity is intolerable, and anything could happen amid such a situation. The sole way to compensate it is that the regional nations become united and resist the real criminals.”

Rouhani also added that “the U.S. troops are not safe in the Middle East and and the insecurity may be inflicted upon European soldiers in the future.”

“Set this security right. We want you to leave the region, not with war but with rationale.

“This is for your own benefit. Take the path that is good for the region and the world,” Rouhani warned.

The existing accord was signed in 2015 between Iran and Russia, China, France, the U.K. and the U.S. plus Germany.

Tensions had been rising between the U.S. and Iran since May 2018, when Trump unilaterally withdrew from the landmark deal.

The U.S. has since embarked on a diplomatic and economic campaign to put pressure on Iran in order to renegotiate the agreement.

As part of its campaign, the U.S. has re-imposed sanctions on exports of Iranian crude oil, which have severely affected Iran’s economy.

*Bassel Barakat contributed to this report from Ankara