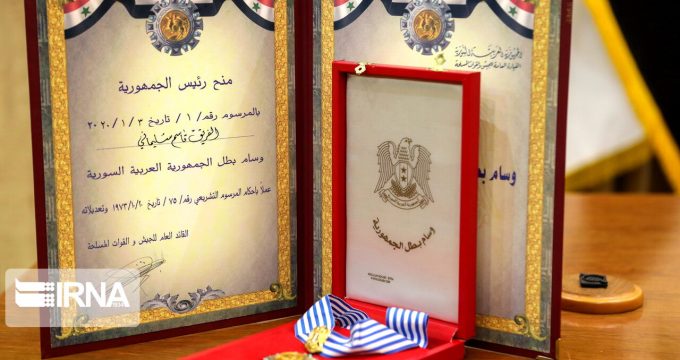 The medal, accompanied by a statement signed by Syrian Preside Bashar Assad, was delivered to the Iranian Defense Minister Brigadier General Amir Hatami on Monday in a meeting that he had with his Syrian counterpart General Ali Abdullah Ayyoub.

The Syrian Prime Minister Imad Khamis had unveiled the medal at a meeting with Iranian First Vice-President Eshaq Jahangiri in Tehran earlier on Monday.

“Awarding this medal reveals the Syrian president’s deep affection for General Soleimani and for his brothers in the Islamic Republic of Iran,” Khamis said.

Lt. General Soleimani, the deputy head of Iraq’s Hashd al-Sha’abi (PMU), and a number of their entourage were assassinated in a strike by American drones near Baghdad International Airport in the early hours of January 3.

The popular Iranian commander played a prominent role in the fight against ISIL terrorists in Syria and Iraq.

Following the assassination, Syrian people took to the streets to condemn the terrorist attack on the Iranian commander and praise his efforts in the war against ISIL.