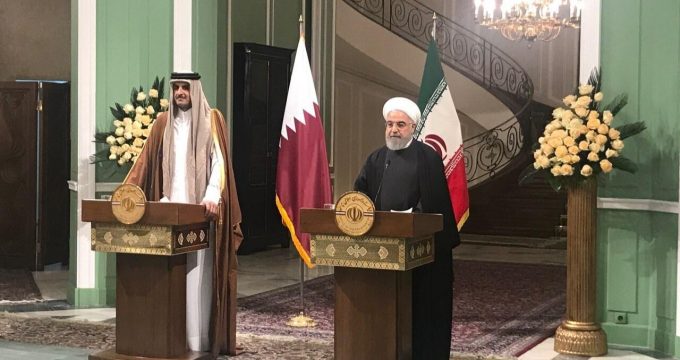 IRNA – Iranian President Hassan Rouhani stressed that at some point some countries in the region have imposed restrictions on Qatar, but Iran has acted on its neighborly, historical and friendly terms, standing by Qatar and it will continue to do so.

Addressing a joint news conference with Emir of Qatar Sheikh Tamim bin Hamad Al Thani on Sunday evening, President Rouhani said that it is clear to all that relations between our two countries are friendly and neighborly.

“We have been with Qatar in recent years after some countries imposed sanctions on Qatar, and we will be with Qatar in the future,” the Iranian president added.

In the next few months, a joint commission will be formed, and we hope that, together with the formation of a joint commission, the two countries will agree on trade, investment, and technology in all fields, the president highlighted.

President went on to say that given the importance of regional security, especially the waterways in the Persian Gulf, the Strait of Hormuz and the Oman Sea, we decided to have more consultations and cooperation for the overall security of the region, he said.

Rouhani underscored that we attach great importance to this visit and the presence of the Emir of Qatar in Iran and we hope to witness wider relations between the two countries and in the benefit of both nations and the whole region.

The high ranking official also stated that we hope this trip has a very beneficial impact on both countries and I would like to thank the Emir of Qatar for visiting Iran again.

Sheikh Tamim bin Hamad Al Thani, the Emir of Qatar, arrived in Tehran today at noon and was officially welcomed by President Hassan Rouhani at the Sa’adabad Cultural Complex.