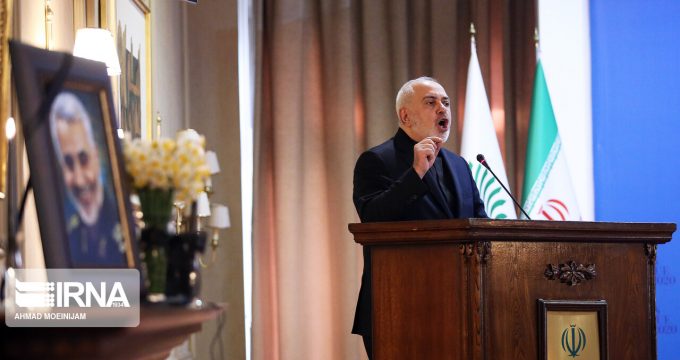 US doomed to expulsion from West Asia due to frequent use of terror, sanctions: Iran FM

Press TV – Foreign Minister Mohammad Javad Zarif says Iran’s Lieutenant General Qassem Soleimani was the victim of America’s “state terrorism,” stressing that Washington is doomed to face expulsion from the West Asia region due to unrestrained use of sanctions and terror.

In an opening address to the Tehran Dialogue Forum in the Iranian capital on Tuesday, Zarif denounced the “American crime and sate terrorism” that targeted the late commander of the Quds Force of Iran’s Islamic Revolution Guards Corps (IRGC), was martyred last week in a US drone strike during a visit to neighboring Iraq.

“By assassinating one of the top Iranian military officials, the US set a precedent for [using] certain methods, whose repercussions will sooner or later begin to haunt it from the west to the east of the globe,” Zarif said, adding that Washington once again proved that it has no respect for and commitment to international regulations.

Zarif further slammed US President Donald Trump for threatening to target 52 sites, some “at a very high level & important to Iran & the Iranian culture” if Tehran avenged the assassination of General Soleimani.

“This is the same schizophrenic and unlawful approach that runs counter to international law,” he added

The top Iranian diplomat further also hailed General Soleimani as the voice of the region’s struggle for independence, saying his “cowardly and brutal” assassination was not only a violation of Iraq’s national sovereignty, but also an attack against “one of the pillars” that maintained security in a region grappling with a variety of plots, ranging from al-Qaeda to Daesh and al-Nusra front.

“The groups, which have been created by the US and their regional servants, consider commanders like Qassem Soleimnai their great enemy,” he pointed out.

“It is not surprising that the rude and insolent US president committed a strategic blunder, driven by his stupidity and arrogance, by assassinating the greatest conqueror of the battle against terrorism and extremism, and the region’s most peace-making general in recent decades. Of course, he has made a huge gamble this time,” Zarif said.

He further underlined the need for comprehensive dialog in the region, highlighting the Hormuz Peace Endeavor (HOPE) which has been proposed by Iran’s President Hassan Rouhani.

“The path the US has been treading for itself and in the region is that of insecurity, war and bloodshed,” contrary to Iran, which is “the voice of peace and calm for the region,” Zarif said.

He noted, “The US marked the end of its illegitimate presence in the Western Asia by assassinating Qassem Soleimani.”

The US, he added, is “doomed to face expulsion from the West Asia due to its unbridled exploitation of the tools of war, sanctions, and assassination. The US will get a decisive and resolute response to its insolence in a place and at a time that it hurts most.”