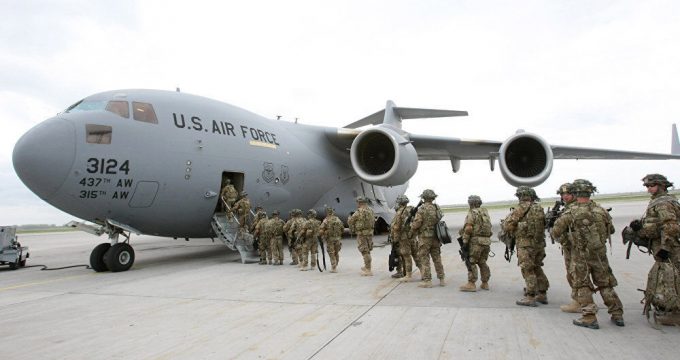 Mechanism to expel US troops from Iraq kicks off

IRNA – A spokesman for the Iraqi Armed Forces announced on Sunday that an operational mechanism to expel US troops from Iraq’s territory kicked off.

Iraqi media quoted Abdul Kareem Khalaf as saying the necessary mechanism had begun for driving out all foreign forces, including US troops from Iraq’s territory.

Some media have previously said that Iraqi Prime Minister Adil Abdul Mahdi is to receive the US ambassador to Baghdad to get the Americans’ timetable for withdrawing its troops from Iraq.

Iraq’s parliament approved Sunday a plan to expel foreign troops from Iraq despite some obstructions yesterday.

The Iraqi parliament’s move came after the Americans launched a drone strike on Friday, contrary to international standards and in gross violation of Iraq’s national and territorial sovereignty, assassinating commander of Quds Force Gen. Soleimani and Abu al-Mahdi al-Muhandis, deputy leader of al-Hashed al-Sha’abi and seven of their companions at Baghdad airport.

Abdul Kareem Khalaf, US assassination of General Qassem Soleimani, us troops in Iraq, US withdrawal from Iraq January 7, 2020
Trump threatens Iraq with sanctions if US troops are expelled
We’ll force US Navy out of Persian Gulf soon: Iran’s chief admiral