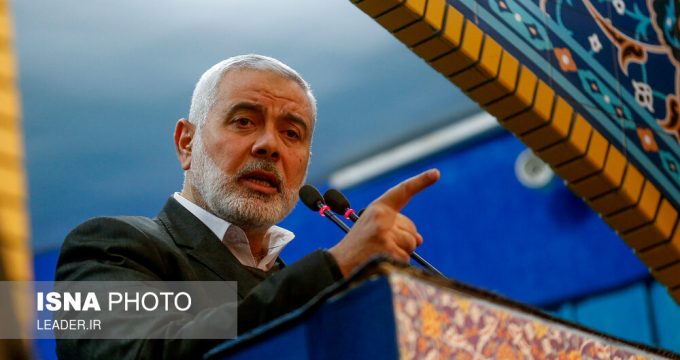 “I announced that the resistance project in the Palestinian lands will continue, it will not be loosened and there will be no retreat. These assassinations and martyrdoms will boost our insistence on stability and resistance and we will continue this path until the freedom of Holy Qods and the Palestinian territories, as well as freedom of regional nations,” Haniyeh said at the funeral procession of General Soleimani.

He reiterated that General Soleimani was “the martyr of Qods”.

He made the remarks in the funeral procession of the General in Tehran, adding he devoted his life for supporting the Palestinians and oppressed people of the region.

Haniyed extended his condolences to Supreme Leader of the Islamic Revolution Ayatollah Seyed Ali Khamenei, the Iranian government, as well as the Iranians on the martyrdom of General Soleimani.

“What the Americans have committed is an atrocity crime that has many manifestations in occupation of Palestine,” he underscored.

He called on the nations and governments to bring to justice the perpetrators of the Soleimani’s assassination.

Lieutenant General Soleimani was martyred in a targeted assassination attack by the US drones at Baghdad International Airport early on Friday morning.

General Qassem Soleimani has been martyred by the US aircraft after lifetime efforts, the IRGC said in a statement early Friday morning.

The airstrike also martyred Abu Mahdi al-Muhandis, deputy commander of Iraq’s Popular Mobilization Forces (PMF), or Hashad al-Shaabi. The PMF media arm said the two were martyred in an American airstrike that targeted their vehicle on the road to the airport.

The Pentagon confirmed the attack in a statement.

The attack came amid tensions that started by the US attack on PMF units that killed 28 Iraqi popular forces. A day later, Iraqi people attacked the US embassy in Baghdad. On Wednesday President Donald Trump ordered about 750 US soldiers deployed to the Middle East.

US officials earlier suggested they were to engage in further retaliatory attacks in Iraq.

The developments also represent a major downturn in Iraq-US relations that could further undermine US influence in the region and American troops in Iraq and weaken Washington’s hand in its pressure campaign against Iran.

US President Donald Trump was vacationing on his estate in Palm Beach, Florida, but sent out a tweet of an American flag.

The attack represents a dramatic escalation by the US toward Iran after months of tensions. The tensions take root in Trump’s decision in May 2018 to withdraw the US from Iran’s nuclear deal with world powers, struck under his predecessor.