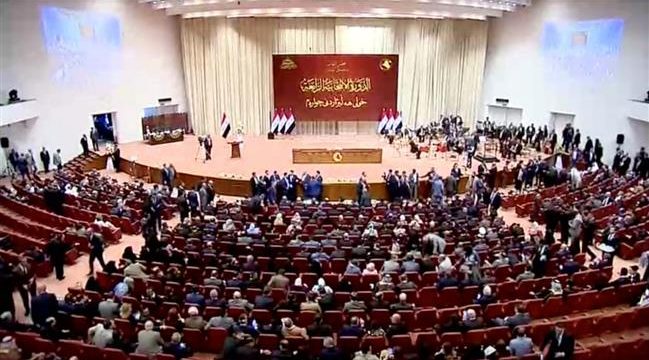 Press TV – A total of 170 Iraqi lawmakers have signed a draft bill, demanding the withdrawal of US military forces from the country in the wake of the assassination of Lieutenant General Qassem Soleimani, the commander of the Quds Force of Iran’s Islamic Revolution Guards Corps (IRGC), and the second-in-command of the Popular Mobilization Units (PMU), Abu Mahdi al-Muhandis.

On Sunday, the legislators used a special parliamentary session to push for a vote on a resolution requiring the government to press Washington to withdraw US troops from Iraq.

The lawmakers, citing Articles 59 and 109 of the Constitution and in line with their national and regulatory responsibilities as representatives to safeguard the security and sovereignty of Iraq, singed a four-point draft bill as follows:

Firstly, the central government in Baghdad is obliged to cancel its request to the US-led military coalition, which was purportedly fighting the Daesh Takfiri terrorist on the grounds, now that military operations have ended in the country, and victory over Daesh has been achieved. The Iraqi government should therefore put an end to the presence of any foreign troops and prevent the use of the Iraqi airspace.

Secondly, the government and the commander-in-chief of the armed forces must announce the number of foreign trainers they need, along with their locations, responsibilities, and duration of their contracts.

Thirdly, the Iraqi foreign minister, on behalf of the government, must turn to the United Nations and the Security Council to file a complaint against the United States for violations of the Iraqi sovereignty and security.

Finally, the plan comes into force once it obtains the parliamentary approval.

On Saturday, the leader of a powerful political coalition in Iraq’s parliament said US forces will be driven out of the Iraqi territory following the vicious, cowardly US operation.

“We offer our condolences to the adherents of Hashd al-Sha’abi and all Iraqis over the martyrdom of Abu Mahdi al-Muhandis, General Soleimani and a number of young valiant men. This is the path of martyrdom, and we hereby declare that we will continue to tread it. We have no reservations whatsoever in this regard,” Hadi al-Ameri, who is the head of the Fatah (Conquest) Alliance, told reporters as he participated in the funeral ceremony for the fallen heroes in the Iraqi capital, Baghdad, on Saturday.

“We will defeat Americans and drive them out, as we did earlier in the face of Daesh. We will expel Americans right before Iraqis’ eyes as they will be frustrated and humiliated.”

“We will press ahead with this struggle. We don’t have any option but to fully restore Iraq’s sovereignty,” added Ameri, who is also the secretary general of the Badr Organization.

Back on August 27 last year, the Fatah Alliance called for the withdrawal of US troops from Iraq, following a series of airstrikes targeting Hashd al-Sha’abi forces in the country that have been blamed on Israel.

The parliamentary bloc said it held the United States fully responsible for the Israeli act of aggression, “which we consider to be a declaration of war on Iraq and its people.”

The US, backed by the United Kingdom, invaded Iraq in 2003 claiming that the former regime of Saddam Hussein possessed weapons of mass destruction.

No such weapons, however, were ever found.

The invaders withdrew from Iraq, after nearly nine years of a military campaign that cost tens of thousands of Iraqi lives.

Leading a new coalition of its allies, the United States returned to Iraq in 2014, when Daesh unleashed a campaign of destruction in the Arab country. Widespread reports, however, said the Washington-led operations largely spared the terrorists and led, instead, to civilian deaths and inflicted damage on the Iraqi infrastructure.

Baghdad declared the end of the anti-Daesh campaign in late 2017.